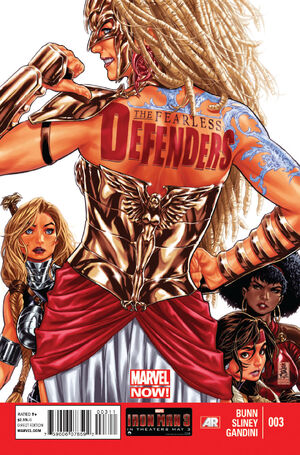 In the Hall of the All-Mother in Asgardia, Valkyrie fights Hela while Hippolyta prevents Misty and Annabelle from intervening. The All-Mother, however, orders Hela and Valkyrie to stop, and Hela explains that Valkyrie cannot confront the Doommaidens because her "Asgardian blood" could be used to fuel devastating "incantations". Hela suggests instead that Hippolyta "must stand for us," and admits that Dani Moonstar has been kidnapped, explaining that Dani's "connection to Hel might be enough...to awaken the Doommaidens." The All-Mother considers the proposition, then orders Valkyrie, Misty and Annabelle to accompany Hippolyta.

"Elsewhere," Caroline le Fay oversees Dani's ritual while reminiscing about her abusive childhood and her desire to see "the end of the world."

In Harrowpoint, Washington, Valkyrie, Misty, Annabelle and Hippolyta arrive, having "tracked the resonance of the ancient rituals to" the town, which they find abandoned and filled with mannequins dressed as superheroes (including Captain America, Miss Marvel, Thor, Wolverine, Hawkeye, and Spider-Man. Valkyrie soon experiences a sensation that draws her to a church, and the group descends into the basement to find a subterranean cavern where the Doommaidens – Arnleif (maiden of seduction), Aldvi (maiden of deceit), Balda (maiden of slaughter), Hermotha (maiden of filth), Daggaerdh (maiden of torture), Siggota (maiden of vermin), Disthora (maiden of insanity), and Nedra (maiden of carrion) – have been successfully awoken.

Hippolyta immediately attacks Daggaerdh and Hermotha, and Valkyrie battles Balda as Mr. Raven and Caroline le Fay watch. Misty lays down coverfire as Annabelle pries open the stone throne and releases Dani, even though "the ritual is mostly complete," and Valkyrie is attacked by Nedra as Hippolyta is subdued by Arnleif. Valkyrie suddenly experiences an "awakening," however, and the Doommaidens bow to her as she transforms her into the maiden of rage.

• Plus! A city of silent superheroes.

• And: Defenders vs. Doom Maidens!

Retrieved from "https://heykidscomics.fandom.com/wiki/Fearless_Defenders_Vol_1_3?oldid=1426398"
Community content is available under CC-BY-SA unless otherwise noted.