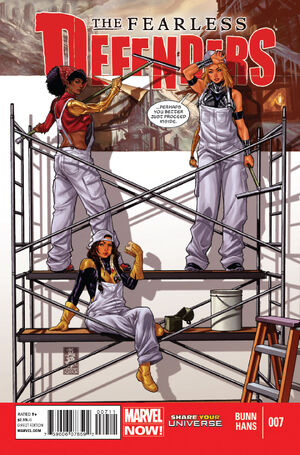 I'm afraid Annabelle and Valkyrie might need time to acclimate to some changes.

In Valhalla, Annabelle feels out of place among "the celebrated dead" of Asgard, and Valkyrie muses that despite Annabelle's courage, Riggs "does not belong" in Valhalla. Valkyrie confronts a group of "murder trolls" hired by Dormammu and battles them before Clea intervenes.

Clea enchants the trolls, which had come to assassiante her, to betray Dormammu and sends them away, then thanks Valkyrie for allowing her to hide in Valhalla. Valkyrie asks Clea to return the favor by bringing Annabelle back to life, but Clea explains that doing so will require a sacrifice.

Annabelle tries to ignore the raucous celebrations of Valhalla's "legendary kings of heroes" until she is called to the main hall, where she finds Valkyrie and Clea. Valkyrie takes Annabelle's hand before Clea performs a ritual, after which she claims that Annabelle can return "to the land of the living."

At her safehouse in New York City, Misty smashes a computer in frustration before Clea and Annabelle appear. Annabelle explains that Clea brought her back to life at Valkyrie's request, but Clea explains that Annabelle's resurrection requires her to share a body with Valkyrie.

• Do not judge anyone’s safety by this cover.

Retrieved from "https://heykidscomics.fandom.com/wiki/Fearless_Defenders_Vol_1_7?oldid=1426402"
Community content is available under CC-BY-SA unless otherwise noted.