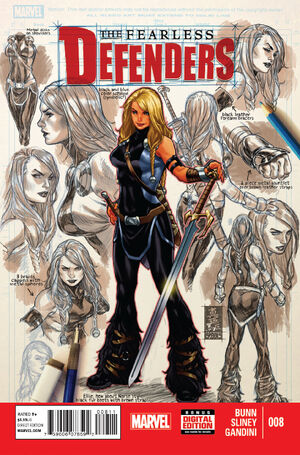 Annabelle...we may share a body...but if you do that again, I will find a way to beat you!

In New York's Chinatown, Misty, Annabelle and Elsa Bloodstone confront members of the Ghost Boys, and learn that the gang is "carrying out hits on various people around Chinatown...all at the behest of some big bad without a name or face." They three then head to the scene of a murder committed using a creature hatched from an egg, and follow the creature's trail into the subway system below the city, where Annabelle transforms into Valkyrie.

Elsa surmises that the creature is a Brood sleazoid, even though sleazoid don't hatch from eggs, and the three continue on until they discover a subterranean lab where "a bunch of scientists and ninjas" are "breeding bio-engineered Brood." They attack, battling humans and monsters alike, but Annabelle prevents Valkyrie from killing a man before Valkyrie reasserts control of their body to kill a Brood sleazoid. Elsa attempts to destroy the lab's machinery, but is stopped by Zheng Bao Yu, who claims that she has resurrected her father's experiment

Misty, Elsa and Valkyrie recover and attack Yu, but Elsa is bitten by a Brood sleazoid before No-Name rescues her; Misty, Elsa and No-Name distract Yu long enough for Valkyrie to shatter the lab's machinery with Dragonfang, and Yu subsequently teleports out of the lab. No-Name claims that the creatures being manufactured in the lab are "freaks of nature...spawned from tainted Brood DNA." Elsa nearly kills No-Name before Valkyrie orders her to stand down, having seen that No-Name has the makings of a shieldmaiden. No-Name, however, leaves as she vows to find Yu, while Elsa admits that she joined Misty and Valkyrie "because of the Doommaidens."

In Midtown Manhattan, Caroline is visited by Yu, who demands to know why le Fay failed to protect her experiment, and Caroline assures Yu that "the absolute worst is yet to come."

Retrieved from "https://heykidscomics.fandom.com/wiki/Fearless_Defenders_Vol_1_8?oldid=1426403"
Community content is available under CC-BY-SA unless otherwise noted.