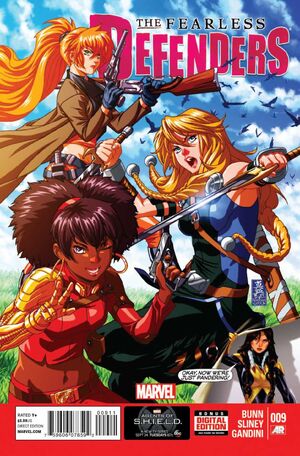 At the Luck o' the Irish Pub in New York City, Venom, Hercules, Werewolf, X-Man, Cannonball, Iron Fist and Stephen Strange meet, awaiting the arrival of each of their respective girlfriends, who are running late.

Outside, Clea, Valkyrie, Misty, Hippolyta, Elsa Bloodstone, and Dani Moonstar battle in the street against Enchantress, Chondu, Quicksand, Arthur Nagan and Ruby Thursday, who have used "a mixture of magic and technology to" bring a pair of Pandemonium Axles – massive stone skull sculptures – to life.

At the bar, each of the men attempt and fail to contact his girlfriend by phone (or "mystic summons"). Venom admits that Annabelle has complicated his relationship with Valkyrie, and claims that the formation of the Defenders "is a bad idea," though Stephen insists that the group merely "could use some guidance." Hercules admits that the last time he saw Hippolyta, she "lost her head," and Iron Fist admits that he doesn't like "the idea of Misty hanging around with some misandric Amazon warrior woman," though Stephen explains that he just wishes that Clea would talk to him. Venom suggests that the men need "to be on the same page if we're gonna help."

Outside, Enchantress phones Caroline to update her on the Pandemonium Axles's progress, but Hippolyta attacks Quicksand as Moonstar, Misty, Clea and Elsa subdue Chondu and Nagan. Valkyrie attacks Enchantress, but retreats from the fight as the Pandemonium Axles begin destroying buildings and targeting civilians; she protects a woman before Annabelle asserts control of their body, recognizing the woman as Kaycee, a former girlfriend who had broken up with her. Kaycee kisses Annabelle, but Valkyrie asserts control of their body to rejoin the battle.

At the bar, Iron Fist and Werewolf play darts as Werewolf laments Elsa's recent obsession with "covenants...and Doommaidens...and cosmic evils," while Cannonball and X-Man realize that they are both dating Moonstar. Venom urges the men to "huddle up" before their girlfriends arrive, but the bartender, Molly Fitzgerald, finally criticizes the men for acting as though women can't "handle this super hero business without a big heap of man to hug them close when the @#$% hits the fan."

In the aftermath of the battle, Valkyrie informs Venom and Stephen that the Valkyrior "can handle the threats that lie before" them without any additional help.

• It’s not easy being an Asgardian shieldmaiden – especially when your boyfriend’s got a chip on his shoulder!

• And Venom’s not alone! He’s brought Dr. Strange, Iron Fist, Hercules, Werewolf By Night, and a legion of significant others with him!

Retrieved from "https://heykidscomics.fandom.com/wiki/Fearless_Defenders_Vol_1_9?oldid=1426404"
Community content is available under CC-BY-SA unless otherwise noted.