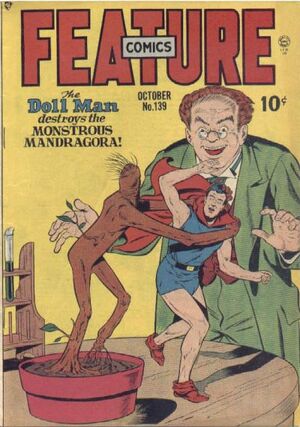 Darrel Dane musters his mighty will power … the stars in their courses spin rhythmically, assisting the miracle, and … Darrel Dane's molecules concentrate into the mighty mite known as … The Doll Man!

Using science based on ancient half-forgotten beliefs, and motivated by his grudge against the scientific establishment (particularly Doctor Roberts), embittered scientist Skeel develops an animated, man-shaped, Dollman-sized plant root, imbued with motion and wisdom. As Doll Man spies on this procedure, this little monster comes to life, hypnotizes Skeel, and escapes his lab. Outside in a driving rainstorm, this marvel of science swells to the size of a full-grown man, steals Skeel's clothing from his clothesline, and builds itself a face from wet clay. Doll Man follows it into town; it seems to be heading toward Dr. Roberts' house. The Mandragora detects Doll Man and tries to capture him is its big floppy hat, but the mighty mite punches his way free, then gets washed down by the torrential downpour into an open sluice. The Mandragora proceeds to Dr. Roberts' house and grabs Martha when she answers the door. Dr. Roberts breaks a chair over its head, Martha gets loose and pulls a gun, uselessly shooting three rounds into the ghastly thing, which then blunders into a closet; they slam the door on it and move some furniture to block it shut. Doll Man meanwhile works his way out of the sewer system and runs to the scene, just as the mis-made monster is smashing its way out of the closet. They fight, breaking a lot of furniture, until the Mandragora is knocked thru a window; it flees across a bridge, blunders over the safety rail, and falls into the river. Doll Man observes that the ghastly horror is finished; he sees the body, we don't. Roberts and Dane go to check up on Skeel, and find him coming out of a deep sleep, with a better attitude and a few misconceptions about the day's events, which they are content to leave uncorrected.

Retrieved from "https://heykidscomics.fandom.com/wiki/Feature_Comics_Vol_1_139?oldid=1396009"
Community content is available under CC-BY-SA unless otherwise noted.