Part of the 'Final Crisis' event 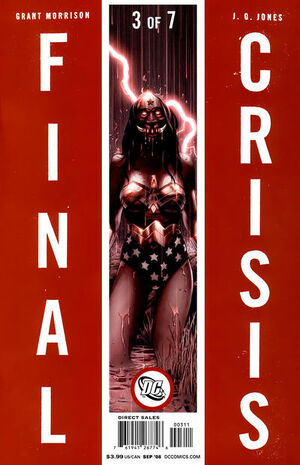 Batman missing in action! Superman immobilized! Green Lantern on trial for his life! A shadow is falling across Earth's super heroes — and now it's Wonder Woman's turn to face the Evil Gods! What bizarre warning from beyond awaits Frankenstein, The Question and the agents of S.H.A.D.E. in the shadows of the Dark Side Club? What grim fate lies in store for The Human Flame? What happens when the Anti-Life Equation hits the internet? Can the Fastest Men Alive outrun The Black Racer — Death himself? And who are the Justifiers? The answers are all here as the unstoppable rise of evil continues in FINAL CRISIS #3 by Grant Morrison and J.G. Jones.

Retrieved from "https://heykidscomics.fandom.com/wiki/Final_Crisis_Vol_1_3?oldid=1712359"
Community content is available under CC-BY-SA unless otherwise noted.