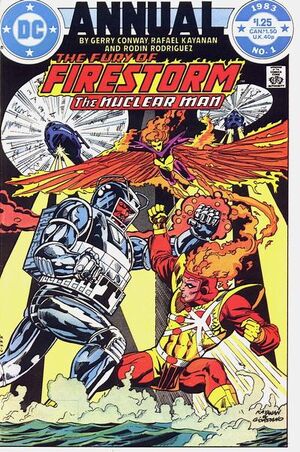 You're a real screw-up, aren't you?

Appearing in "All the Answers..."Edit

Synopsis for "All the Answers..."Edit

Tokamak traps Firestorm inside of three plasma rings. He struggles to free himself but the atomic rings begin shrinking, crushing him to death. Tokamak continues attacking Manhattan General Hospital. He finds Lorraine Reilly and enforces his hypnotic control over her. He scoops her up into his arms and flies off towards his command craft. Once on board, the Enforcer places her back inside a containment cell along with her father, Walter Reilly.

Meanwhile, Firestorm realizes that the only way to break free of the plasma bottle containing him is to generate a miniature nuclear explosion. The plan works, and Firestorm is free. He quickly absorbs the explosive radiation from the surrounding area thus minimizing the damage. He then takes off to track down Tokamak.

Later, Firestorm stops at Harry Carew's apartment so Stein can pick up a change of clothes. He witnesses Harry becoming friendly with his ex-wife, Clarissa Clemens, but Harry insists that he has no interest in her. Before the matter can be settled, the Enforcer bursts through the window. Stein succeeds in prompting the Firestorm transformation without exposing his secret identity and begins fighting the villain.

On board Tokamak's command craft, the self-styled "Human Reactor" declares that Lorraine and Walter Reilly are to be executed. Multiplex believes that killing a state senator will bring too much heat down on them. He gathers his various Duploids together and leaves Tokamak's vessel.

Multiplex later encounters Firestorm. Rather than fight with him however, he tells the hero where Tokamak has taken the Reillys. He further informs him of their pending execution. Firestorm grabs Multiplex and flies towards Washington.

Firestorm bursts into Tokamak's command craft and pulls the villain outside. They begin fighting on Capitol Hill and Ronnie animates a statue of Thomas Jefferson to assist him. During the melee, Lorraine snaps out of her hypnotic state and transforms into Firehawk. She grabs her father and vacates the ship.

After depositing him in a safer location, she joins Firestorm in tackling Tokamak. She unleashes a wave of energy upon him, severely damaging his containment suit. Ronnie realizes that Tokamak's body will soon overload with nuclear energy. Unable to save him, he uses his powers to propel the villain high into the atmosphere, where he explodes in a brilliant burst of energy.

Later, Ronnie Raymond returns home. He discovers that his father, Ed Raymond, is miraculously still alive. The bomb that "Shoe" Shine attempted to assassinate him with exploded prematurely. Raymond’s friend, Wallace Hapgood (revealed to be a former Justice Department official), kept Ed Raymond's survival a secret until such time that it was safe for him to come back out in the open. Wallace reveals that "Shoe" Shine was recently gunned down by a rival gangster. Ronnie and his father are reunited.

Retrieved from "https://heykidscomics.fandom.com/wiki/Firestorm_Annual_Vol_2_1?oldid=1569728"
Community content is available under CC-BY-SA unless otherwise noted.