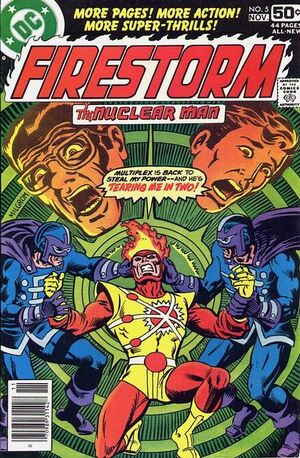 Terrific! I ask for help, and you give me a science lecture! You’re worse than some of my teachers!

The Hyena leaps upon Firestorm delivering a massive flurry of blows. The hero attempts to use his atomic restructuring powers to stop the Hyena's assault, but she moves too quickly for him to erect a defense. Hyena specializes in close-quarter combat and rakes Firestorm across the face with her diamond-tipped vibro-claws. Ronnie manages to animate a nearby electrical tower. The tower falls on top of the Hyena rendering her unconscious.

Meanwhile at the Downtown Medical Center, Multiplex comes out of his coma. During his convalescence, he had learned more about his fission powers and now uses them to escape. Multiplex absorbs all of the electricity from the medical center and becomes a physical powerhouse. He breaks through the hospital wall and runs off in search of even more power.

Later, Ronnie Raymond takes Doreen Day to the New York News Express offices to introduce Doreen to his father. They meet a secretary named, Hildy Park, who informs them that Edward Raymond isn't in the office. She further reveals that Raymond has only been working as a journalist for a short period of time – a revelation that comes as a great surprise to his son. Ronnie believed that his father worked as a reporter all of his life. His attention is diverted however as he learns that Multiplex has escaped.

Martin Stein meanwhile meets with private detective Liam McGarrin at a bar. McGarrin has been laboring to discover why Stein has been suffering from periodic blackouts. Stein is heavily inebriated when he finds himself transforming into Firestorm.

Firestorm manifests in downtown Manhattan. They begin fighting Multiplex, but Stein's inebriation is adversely affecting Firestorm's manual dexterity. Two of the Multiplex duplicates grab a hold of Firestorm and begin to siphon his nuclear energy directly from his body. Firestorm decides to overload Multiplex with a surplus of power. Multiplex splits into one-thousand duplicates – each of which are less than three inches in height. Unable to present a realistic threat to Firestorm, the mini-duplicates blink out of existence.

On a rooftop above the city streets, Multiplex-prime appears. He had sent his duplicates after Firestorm while the core body remained hidden, watching from the shadows. Multiplex finds a new partner in crime; a like-minded villain who harbors a hatred of Firestorm nearly as intense as his own – the Hyena.

Retrieved from "https://heykidscomics.fandom.com/wiki/Firestorm_Vol_1_5?oldid=1425927"
Community content is available under CC-BY-SA unless otherwise noted.