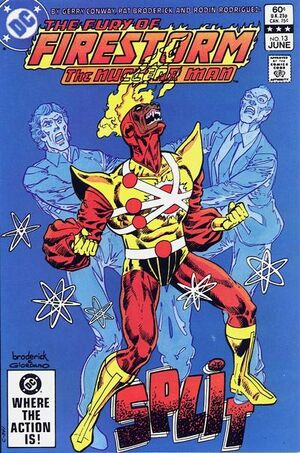 Just once I wish people would ask first and shoot later!

Firestorm flies to the African veldt of Nairobi in the hopes of finding a cure for the curse that is now slowly turning him into a were-hyena. Further, he has recently discovered that he can no longer separate into Ronnie Raymond and Martin Stein. Firestorm meets with the president of Nairobi and shows him the diary of Summer Day. Summer's journal reveals the events that she first contracted the curse while working in Nairobi for the Peace Corps. The president agrees to help Firestorm in any way he can.

In Manhattan, Harry Carew tries to convince Quentin Quale to give Martin Stein his old job back. Quale refuses to consider the notion and ushers Harry out the door. Harry runs into Clarissa Clemens – Stein's ex-wife.

Elsewhere, someone has kidnapped Lorraine Reilly. She is bound to a chair and held inside of a small, darkened room.

At Bradley High School, Ed Raymond storms into Principal Hapgood's office demanding to know where Ronnie is. Neither Wallace Hapgood nor any of Ronnie's friends have any idea where has disappeared.

In Nairobi, Firestorm's condition worsens. The president has arranged for a mystical ceremony to take place in an effort to cure Firestorm of the curse. He is bound to a cruciform post where an African shaman named Kanyatta presides over a ritual to return him back to normal. Immediately following the ritual however, guerilla revolutionaries begin raiding the village. Firestorm flies into action and quickly puts a stop to the violence. However, he is not fast enough to save Kanyatta from going down in a hail of bullets. Firestorm realizes that the only reason the president agreed to help him, was that he intended on manipulating Firestorm into fighting the revolutionaries on his behalf. Frustrated, Firestorm flies back towards the United States.

Retrieved from "https://heykidscomics.fandom.com/wiki/Firestorm_Vol_2_13?oldid=1425940"
Community content is available under CC-BY-SA unless otherwise noted.