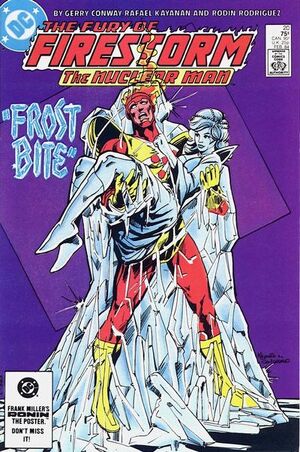 Let me tell you about pity, Warden. Pity kills the soul. Pity can break your heart.

Firestorm and Firehawk fly about Manhattan Island and encircle the Statue of Liberty. They talk about recent events, and Firehawk recalls her origin.

In Washington DC, senator Walter Reilly of New York appears before a special judiciary panel. Senator Darcy accuses Reilly of selling his vote for the benefit of big business. Reilly doesn't tell them that Henry Hewitt had kidnapped his daughter Lorraine and had been blackmailing him to vote on the atomic research spending bill.

Back in New York, Killer Frost tracks Martin Stein down to a subway station. She chases him into the station and Martin is forced to change into Firestorm. When Firestorm circles about however, he finds that Killer Frost has gotten away.

Retrieved from "https://heykidscomics.fandom.com/wiki/Firestorm_Vol_2_20?oldid=1425947"
Community content is available under CC-BY-SA unless otherwise noted.