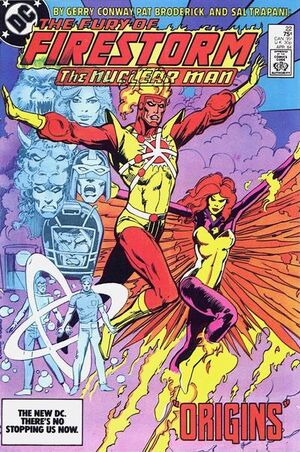 Lorraine, did you ever have one of those moments when everything looked beautiful?

Appearing in "The Secret Origin of Firestorm"Edit

Synopsis for "The Secret Origin of Firestorm"Edit

Firestorm and Firehawk and soaring through the skies of New York. They settle down on the roof of a building and Firehawk pressures the hero into revealing his origin. Stein is hesitant, but Ronnie insists on telling Firehawk everything there is to know about him.

Ronnie Raymond had just relocated to Bradley High School and was having a difficult time making friends. He met Doreen Day – a young girl that he took an instant liking to. He also met Cliff Carmichael – the resident school jerk. Ronnie sought to impress Doreen by becoming politically active in the community. He joined an anti-nuclear protest group known as the Coaltion to Resist Atomic Power. Little did Ronnie know however, was that the leader of the group, Eddie Earhart, was actually a terrorist. The Coalition prepared to blow up the recently constructed Hudson Nuclear Power Plant. Ronnie believed that they were simply going to stage a harmless protest.

The Hudson Nuclear Power Plant was vacant, but for one man – designer Martin Stein. Stein claimed that the plant was going to be the world's first completely safe nuclear power facility in the world. One of Stein’s former assistants, a man named Danton Black arrived at the plant in an effort to blackmail Stein.

Before long, the Coalition arrived and Ronnie discovered what the group's true motivations were. Eddie Earhart rendered both Raymond and Stein unconsciou and set explosives throughout the reactor core of the facility. The dynamite exploded and the wave of energy from the reactor core fused Ronnie Raymond and Martin Stein into a single composite being – Firestorm. What Firestorm didn’t know at the time however, was that Danton Black was still present in the plant and was likewise bathed in the wave of energy. He would soon develop fission powers and become the super-villain known as Multiplex.

After telling Firehawk his story, the two embrace and take off into the night sky.

Retrieved from "https://heykidscomics.fandom.com/wiki/Firestorm_Vol_2_22?oldid=1425949"
Community content is available under CC-BY-SA unless otherwise noted.