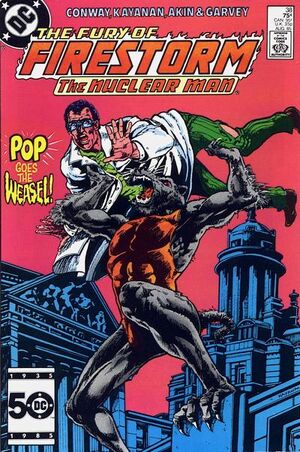 It smelled like an animal, smelled of hair and blood.... I was terrified, Ronald.

Appearing in "Night of the Weasel"Edit

Synopsis for "Night of the Weasel"Edit

Professor Martin Stein begins working at Vandermeer University. Dean Emily Rice welcomes him to the campus and tells him that he is replacing Professor Peter Banks - one of several faculty members who has been recently murdered in recent weeks.

In Manhattan, Ronnie Raymond and Doreen Day go to a night club. Cliff Carmichael shows up and accuses Ronnie of cheating on his exams. Ronnie tries to defend himself to Doreen, but cannot explain his high test scores.

At New York News Express, Ed Raymond meets with his lover Felicity Smoak. Felicity tells Ed of her intent to sue Firestorm for magnetizing the software tapes at her firm.

Back in Pittsburgh, a villain known as the Weasel attacks Professor Stein in the shower in his hotel room. Stein cannot see without his glasses, and cannot understand what is going on. The Weasel pushes him out the window, but Stein prompts the change into Firestorm. Stein's poor vision affects Firestorm's visual acuity and the Weasel is able to escape.

Later, the Weasel manages to capture both Professor Stein and Ronnie Raymond and brings them to a smelting plant. As they regain consciousness, they find the Weasel preparing to tip a cauldron of molten steel down on top of them.