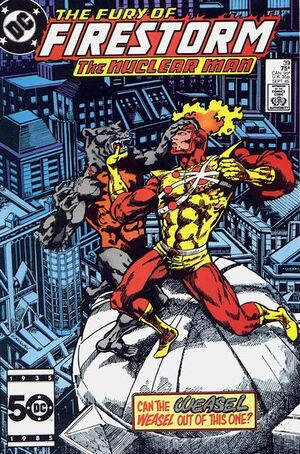 Oh sure, that makes sense. You try to kill me, I defend myself, and what happens to you is my fault. Buddy, you should be a lawyer.

Appearing in "Publish & Perish; or, the Academic Life is Killing Me!"Edit

Synopsis for "Publish & Perish; or, the Academic Life is Killing Me!"Edit

Ronnie Raymond and Martin Stein awaken inside Steel Plant #3 where the Weasel is in the process of dumping a vat of molten steel on top of them. They quickly change to Firestorm and evade the river of liquid metal. The Weasel however, escapes.

Splitting back into their forms, they split up and investigate the Weasel mystery from different angles. Stein returns to his hotel room where he finds police sealing off the crime scene, as well as Vandermeer University dean of admissions, Emily Rice. Emily feels guilty for the threat against Stein's life, and admits that she invited to join Vandermeer's staff because she once had a crush on him.

Ronnie meanwhile, investigates the campus' records room. He learns that all of the Weasel's victims had two things in common: They were all employees at Vandermeer, and they all went to school at Stanford University in the 1960s - including Martin Stein. The Weasel finds Ronnie pouring through the records and attacks him from behind. Ronnie prompts the change into Firestorm and begins fighting back.

While Firestorm chases the Weasel throughout the streets of Pittsburgh, Ronnie explains to Stein everything that he learned. Stein admits that he once went to Stanford, but he doesn't know anything about the Weasel's other victims. Firestorm finally catches the Weasel and unmasks him. The Weasel is actually John Monroe, a former Stanford student and Vandermeer scholar. Ronnie theorizes that Monroe was always neglected in school and wanted revenge against his peers for ignoring him. The police arrive and take the Weasel into custody.

Retrieved from "https://heykidscomics.fandom.com/wiki/Firestorm_Vol_2_39?oldid=1425966"
Community content is available under CC-BY-SA unless otherwise noted.