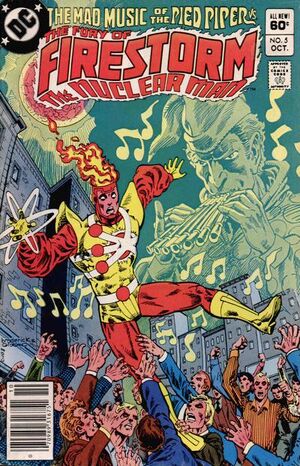 Heck, Professor, we share this nuclear bod, don’t we? That means Lorraine is interested in you, too.

Appearing in "The Pied Piper's Pipes of Peril!"Edit

Synopsis for "The Pied Piper's Pipes of Peril!"Edit

Firestorm swoops down out of the sky and saves two children who had been playing on top of a moving train. After moving them to a safer location, he flies up into the clouds where he reads a personal classified ad from Lorraine Reilly inviting the hero to have dinner with her. Afterwards, he returns to Bradley High School where he begs Coach Mason to allow him back onto the basketball team.

In uptown Manhattan, a Greek merchant named Pandrakos visits Senator Walter Reilly. He sells him an ancient artifact known as the Pipes of Pan. From across the street however, the villain known as the Pied Piper witnesses the transaction. He smiles greedily as he prepares to procure the pipes for himself.

At Concordance Research, Harry Carew analyzes the tape recording made by Professor Martin Stein. He recovers some of the lost sound bites, which speaks of an incident concerning the Hudson Nuclear Power Plant. Stein walks in behind Harry and surprises him.

Meanwhile, the Pied Piper invades the home of Senator Reilly. He uses his special flute to hypnotize Reilly, allowing him the ability to steal the Pipes of Pan. With the access to a powerful mystical artifact, the Pied Piper hypnotizes the entire Manhattan area. Ronnie Raymond and Martin Stein transform into Firestorm and fly into action. The Piper commands his legion of subservient citizens to attack Firestorm. Realizing that the obedient throngs of people are just innocent victims, Firestorm is reluctant to use his powers against them. As the Piper continues to play, dozens of citizens swarm over Firestorm's body.

Retrieved from "https://heykidscomics.fandom.com/wiki/Firestorm_Vol_2_5?oldid=1425932"
Community content is available under CC-BY-SA unless otherwise noted.