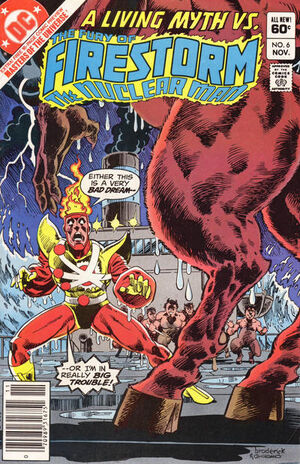 Somehow, your pop got hold of some special pipes – pipes the Piper picked to purloin.

A throng of hypnotized New York pedestrians swarm over top of Firestorm, while the Pied Piper continues to produce hypnotic rhythms issuing forth from the Pipes of Pan. Unwilling to hurt any of the innocent victims, Firestorm uses his molecular restructuring powers to turn a fire hydrant into a fire hose. He douses the crowd with city water, pushing them away from him. He then flies up to the roof of Senator Walter Reilly's townhouse and turns the hose against the Pied Piper. The Piper falls backwards, dropping the mythological pipes. Police arrive to arrest the Piper while the Pipes of Pan mysteriously disappear.

A short time later, Firestorm separates into Ronnie Raymond and Martin Stein. Ronnie drops Martin off at his apartment in Queens, and then races back to school. At Bradley High, Ronnie makes up with Doreen Day, despite the fact that his thoughts are on, Senator Reilly's daughter, Lorraine.

That evening, the Pied Piper is resting in the Men's Detention Center in downtown Manhattan when he realizes that he is slowly transforming into a satyr. Word of this reaches the ears of Firestorm who meets up with the villain as he is transferred to a local hospital. The Piper tells Firestorm that he doesn't know the present location of the Pipes of Pan. He acquired them in Athens, Greece from a merchant named Niko. Firestorm learns that a dealer named Pandrakos sold the pipes to Senator Reilly.

Firestorm flies to Athens where he discovers that the merchant trader, Pandrakos, is actually the Greek horned-god known as Pan. Pan has taken command of a vessel called the "Hermes" and transforms all of the ship's crew into satyrs. He has his pipes again and uses the music in an effort to hypnotize Firestorm. Firestorm traps Pan inside of a steel cube and dumps him into the Aegean Sea. Without anyone to hear the music, all of the effects produced by the Pipes of Pan cease. The Pied Piper returns to normal, and Firestorm flies back to New York.

Appearing in "Masters of the Universe"Edit

Synopsis for "Masters of the Universe"Edit

Fate is the Killer
The Sailor of the Solar Winds known as Zodac arrives at the royal palace on the planet, Eternia. He warns the ruling council that the land's most powerful hero must leave Eternia forever or else he risks losing his life. Prince Adam knows that Zodac speaks of his alter ego, He-Man. He leaves the palace and summons the Sorceress in the hopes of gaining clarity as to Zodac’s cryptic warning. The Sorceress tells He-Man that his arch-nemesis, Skeletor, is very close to finding the second half of the fabled power-sword. If both halves of the sword are joined, he will have the power to rule all of Eternia.

Everyone arrives in front of Castle Grayskull. Superman assists in retrieving one of the other missing swords and gives it to He-Man. He-Man and Skeletor fight one another and impale each other upon their respective swords. Skeletor teleports back to his lair to nurse his wounds, leaving He-Man on the ground bleeding. Zadoc arrives and uses his power to heal He-Man. He then creates another dimensional tunnel and returns Superman back to Earth.

Retrieved from "https://heykidscomics.fandom.com/wiki/Firestorm_Vol_2_6?oldid=1425933"
Community content is available under CC-BY-SA unless otherwise noted.