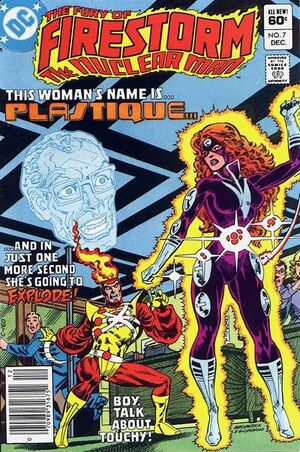 I am ready to die – eager to die! Death is my weapon and my lover! Take me!

Appearing in "Plastique is Another Word for Fear!"Edit

Synopsis for "Plastique is Another Word for Fear!"Edit

A Canadian terrorist named Andre sits atop a fuel tower somewhere in southern New Jersey. He is armed with a bomb and threatens to destroy the station and himself unless the energy industry agrees to remove all of their financial interests from the Canadian province of Quebec. The super-hero known as Firestorm arrives prepared to take the terrorist down. Martin Stein warns him against mocking the criminal's intentions, but Ronnie believes that the man is bluffing. He quickly learns however that he isn't. Andre detonates the bomb and the fuel facility is consumed in a massive explosion. Firestorm flies towards the pinnacle of the blast radius and begins absorbing as much thermal energy into his body as he can. He successfully keeps the damage contained to a small area. News crews and journalists crowd the scene and everyone begins assaulting Firestorm with a barrage of questions. Initially Firestorm plays up to the cameras until he realizes that one of the reporters is his own father, Ed Raymond. Nervous, Firestorm quickly flies away.

Some time later, Ronnie Raymond visits his father at the New York News Express office in Manhattan. He tries to have a conversation with the man, but Ed is too preoccupied with the recent terrorist attack to pay any attention to him.

A Canadian terrorist known as Plastique enters the Express offices. Plastique had been in league with Andre, and now operates to further a similar cause. She is armed with several palm-sized detonators that she has attached to the sides of her costume. She holds the entire news crew hostage, and threatens to blow up the building unless her demands are met. She informs the news crew that they have until 10:00 pm to remove their paper stock from Quebec-based paper mills or else she will kill everyone. Ronnie is prepared to change into Firestorm, but is concerned about exposing his secret identity in front of his father.

Meanwhile, Professor Stein sees footage of Plastique's attack on a television news station. He races down to the New York News Express office and sneaks into the maintenance closet. He shuts down all of the power in the building, allowing Ronnie and he the opportunity to change into Firestorm without risking their respective secret identities.

Firestorm manifests in front of Plastique and manages to clear the room out. Plastique throws one of her bombs towards him and he uses his molecular restructuring powers to phase his father and another reporter through the floor. The bomb detonates and Firestorm absorbs the brunt of the blast. He then uses his powers to make Plastique's costume disappear. Her supply of bombs drops harmlessly to the floor and she is quickly apprehended.

Retrieved from "https://heykidscomics.fandom.com/wiki/Firestorm_Vol_2_7?oldid=1549015"
Community content is available under CC-BY-SA unless otherwise noted.