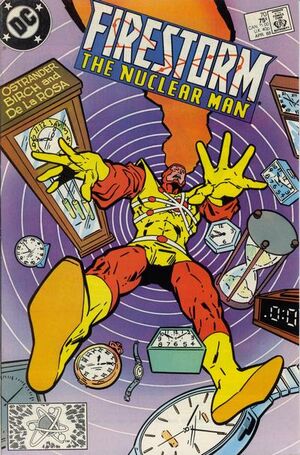 I will take the lead in the questioning, comrade Gort. If the boy needs some convincing to tell us whatever his connection is with Firestorm, you will provide the encouragement.

Dean Emily Rice of Vandermeer University gives a presentation about Vandermeer's cooperation with the Strategic Defense Initiative. Suddenly, a spectral image of a long-haired man appears in the room and destroys one of the prop models. Rice recognizes the man and whispers the name "Rikkard".

In the reaches of the Fourth Dimension, the astral entity of Rikkard Rynders encounters the disembodied Firestorm matrix. Rikkard, who introduces himself as the Flying Dutchman of Time, shows Firestorm images of the past and the experiment he conducted in the 1960s that separated his astral self from his corporeal body. He needs Firestorm's help to set things right.

In Pittsburgh, Richard Dare, grandfather to Ronnie Raymond arrives at the Raymond apartment. He warns Ronnie and his stepmother Felicity that the KGB has sent Russian agents in search of Ronnie for they believe that he is connected to Firestorm. Suddenly, Stalnoivolk - the Steel Wolf, bursts through the wall of their home ready to attack.

That evening, Bree Daniels of Vandermeer visits the apartment of Dean Emily Rice. She learned of Rice's past association with Rikkard and Emily tells her of her history with him during the 1960s.

In Russia, prosecutor Soliony suspects that the incarcerated Mikhail Arkadin might have a connection to Firestorm. He interrogates Arkadin in his cell, but Mikhail puts up a firm front. Meanwhile, the kids of Soyuz discuss a strategy on how to free Mikhail from prison.

Back in the timestream, Rikkard Rynders brings the Firestorm matrix back in time to the day that he first performed the experiment. Rikkard is barred from rejoining his body, and forces Firestorm to merge with his 1960s corporeal self.

Retrieved from "https://heykidscomics.fandom.com/wiki/Firestorm_Vol_2_70?oldid=1425999"
Community content is available under CC-BY-SA unless otherwise noted.