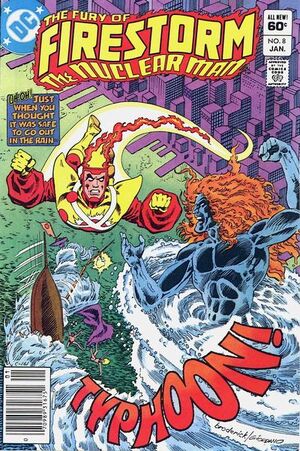 What a paltroon! What a first-class garbonzo

Firestorm arrives at Martin Stein’s laboratory at Concordance Research. Stein wants to test the limits of Firestorm’s energy expenditure. What Stein doesn’t realize however, is that his nosy colleague, Harry Carew, has hidden listening devices planted throughout every laboratory. Firestorm hooks himself up to a device desinged to measure his rad-levels. He overloads the equipment and there is a thunderous explosion. Harry Carew rushes over to see what has happened. Fortunately, Firestorm separates into Ronnie Raymond and Martin Stein before Harry throws the door wide open. Stein introduces Harry to Ronald and provides a false alibi explaining the noise he heard.

In Australia, David Drake is released from the Sydney Metropolitan Hospital. He discovers a letter from his wife, Sarah, explaining that she can no longer handle the fact that David is also the villain, Typhoon. She further tells him that she is leaving him and has taken his children with her. All of the psychological therapy Drake has endured for the past several months instantly unravels. He transforms into Typhoon, vowing revenge upon those responsible for his condition.

Meanwhile, back in the United States, Ronnie Raymond goes to the movies with his friends, Doreen Day, Jefferson Jackson and Stella. They soon realized that Cliff Carmichael has followed them to the movie theater. Cliff attempts to play a prank on Ronnie by slipping a lizard into his popcorn. The stunt fails however, as Doreen is the one who discovers the reptile – not Ronnie. Ronnie and Cliff come to blows outside of the movie theater, but Doreen quickly breaks it up. Neither man is satisfied however, and they agree to meet again the next day at school.

Later that evening, Typhoon arrives in New York City. Generating a fantastic wind storm, he smashes through the Brooklyn shipyards, until he finds Anton Hammer. Anton Hammer was the captain of the Neptune Explorer – one of the ship’s present during the accident that first transformed Drake into Typhoon. Typhoon kills Hammer and drags his body within the wake of his storm trail. He then goes to Concordance Research, where he heaves Hammer’s corpse through the window of Stein’s office. Martin rushes out and realizes that it is time to form Firestorm once again.

Firestorm’s first priority is to save innocent lives. Through trial and error, he attempts to direct people out of the path of Typhoon’s fury. The villain manages to get the upper hand on Firestorm however and knocks him a crippling blow. Firestorm falls out of the sky unconscious into New York Bay and begins drowning.

Retrieved from "https://heykidscomics.fandom.com/wiki/Firestorm_Vol_2_8?oldid=1425935"
Community content is available under CC-BY-SA unless otherwise noted.