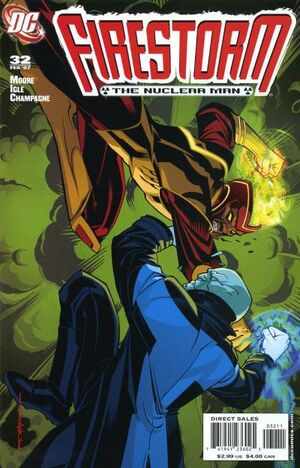 Boys... just so I'm clear on what's going on here... is this a "Brokeback Mountain" thing, or a "Felix and Oscar" thing?

Appearing in "In My Father's House (Epilogue) - What People Do"Edit

Synopsis for "In My Father's House (Epilogue) - What People Do"Edit

Jason Rusch cradles Tokomak in his arms and ponders his foe's final words, "I know why you're Firestorm... and you'll never know. Jason has no idea what Tokomak meant, but it is too late to ask him now. Flying off, Jason soars into space to deal with the last of the Dollies. He receives a telepathic call from Mikhail Arkadin, who indicates that he has just found the Pionic Man.

Returning to Earth, Firestorm flies to Times Square, where he finds the Pionic Man and the Head Dollie sitting in a diner having a discussion about where they want to live. Jason is amused to find the two super-beings apartment-hunting together.

Later, he reunites with Professor Stein who is suffering from holiday depression. The Professor criticizes Jason for using his powers against organic matter, and reveals that the feedback exchange from his fight with Tokomak has opened up several small wormholes on Earth. Stein merges with Jason to form Firestorm and they use their power to absorb the ambient feedback energy into their body. The wormholes break down and everything returns to normal.

That night, Jason telephones his father, who is spending the night with his ex-wife.

Retrieved from "https://heykidscomics.fandom.com/wiki/Firestorm_Vol_3_32?oldid=1426067"
Community content is available under CC-BY-SA unless otherwise noted.