"First Time Again" is the sixth season premiere of the post-apocalyptic horror television series The Walking Dead, which aired on AMC on October 11, 2015. The episode was written by Scott M. Gimple and Matthew Negrete, and directed by Greg Nicotero. The episode aired in an expanded 90-minute time slot.[1]

The Alexandria Safe-Zone community deals with the aftermath of several deaths while dealing with new circumstances, as Rick Grimes (Andrew Lincoln) takes on leadership.

Rick Grimes (Andrew Lincoln) and the Alexandrians stand at the top of a granite quarry filled with thousands of walkers. As Rick begins to make a speech outlining his plan to lure the walkers out of the quarry and away from the Safe-Zone, a rock collapses beneath one of the trucks that had been blocking an exit, freeing the walkers. Rick is forced to immediately execute his plan, a day ahead of schedule, while the Alexandrians who haven't been told the details flee for their lives. Flare guns and Daryl Dixon's (Norman Reedus) noisy motorcycle are used to lure the walkers out in a parade, turning them west and up a valley.

Black and white flashbacks show select events following the town council meeting where Reg and Pete were killed. Glenn Rhee (Steven Yeun) brings Nicholas (Michael Traynor) in for medical treatment, concealing his actions. Tara (Alanna Masterson) awakens. Deanna Monroe (Tovah Feldshuh) blames Father Gabriel Stokes (Seth Gilliam) for turning her against Rick's group. In the morning, Heath (Corey Hawkins) returns from a two-week supply run with his team of Scott and Annie. Morgan Jones (Lennie James) tells Rick about the "Wolves", when they encounter Tobin (Jason Douglas) and Gabriel burying Pete and Reg's corpses. Rick stops them from burying Pete saying the killer should not be buried within the walls, while the grieving Deanna tells them to discard Pete's corpse in a lonely woods. There, Rick and Morgan discover the quarry where they deposit walkers accidentally attracted by Pete's oldest son Ron (Austin Abrams) who had followed them. Rick realizes that the quarry serves as a walker trap that had helped keep Alexandria safe, but it now represents a serious threat with hundreds of walkers behind barricades which will eventually fail. Morgan has been provoking Rick to question his conscience, and in Ron's presence Rick changes his mind and begins to dig a grave for Pete instead of dumping his body like trash.

Rick warns Alexandria about the threat of the herd in the quarry. Grieving, Deanna has mentally checked out and effectively cedes authority to Rick, who voices his intention to free the walkers from the quarry and lure them 20 miles away from the Safe-Zone. Rick's group present a strong and united front against protests from the Alexandrians, though Carter (Ethan Embry) is brave enough to raise valid objections at the risks in executing Rick's plan. Later, when an unarmed construction team is building a wall intended to turn the herd, Rick unexpectedly holds back his armed people and allows walkers to close with them, in an effort to teach them to defend themselves with their tools at hand. Shocked, the construction team panic and falter, and Rick's people defy his orders to save the Alexandrians' lives. Carter is outraged and secretly meets with Spencer Monroe (Austin Nichols), Tobin, Francine (Dahlia Legault), and Olivia (Ann Mahoney) in the armory and proposes to assassinate Rick before he kills someone else. Eugene Porter (Josh McDermitt) is caught overhearing the proposed plot and Carter contemplates killing Eugene but is stopped by Rick who arrives in force with Daryl & Morgan. Rick takes Carter down to his knees and holds Carter's pistol to his head for several moments, thoroughly dominating Carter before letting him up to serve his plan.

In the present, Daryl, Abraham Ford (Michael Cudlitz), and Sasha Williams (Sonequa Martin-Green) act as bait to lure the escaped walkers away from Alexandria. Abraham shows signs of PTSD over Rick's slaying of Pete while Abraham was restraining him. Glenn leads Nicholas and Heath to kill walkers trapped in a store along the route, whose noise might otherwise distract the herd. Glenn is concerned about Nicholas being ready but Nicholas does more than his part.

Rick has lines of people in the woods on either side of the road and tells them they need to watch the walkers like "cops at a parade" to ensure walkers do not stray off. Carter runs to the front, thoroughly submissive and trusting his life to Rick's plan rather than his own judgement, and is grabbed and bitten in the face by a walker unexpectedly trapped amongst the trees. Carter's terrified screaming attracts the walkers on the road, so Rick has the group fire guns to redirect them back to the course. Rick finds Carter and kills the walker attacking him, then stabs the screaming man in the neck.

They are nearing the green marker where Rick believes the parade of walkers will continue on course without further intervention, when a distant horn starts blaring. The rear half of the parade turn toward the noise and break into a loose herd as they filter through the woods. Rick and Michonne immediately realize the sound is coming from Alexandria, and that Rick's plan has no contingency for this. 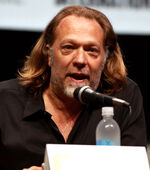 "First Time Again" features the first appearance of Lennie James as a series regular; James reprises his role as Morgan Jones from previous appearances in seasons one, three and five.[5][6] Series creator Robert Kirkman described Morgan as "very different (and cooler) than his comics counterpart" and expressed excitement over James' involvement in the season, saying, "Having Lennie, who was such a huge part of season 1 and amazing every time we had him back, finally a regular part of this show is really going to energize this show for the coming season. And I would argue this show wasn’t really in need of re-energizing, so it’s just going to be that much better."[5] The episode also marked the first episode which features Tovah Feldshuh, Alexandra Breckenridge, Ross Marquand, and Austin Nichols as part of the main cast; they reprise their roles as Deanna Monroe, Jessie Anderson, Aaron, and Spencer Monroe, respectively, from the fifth season.[7]

Following the promotions, new Alexandria characters have been announced, who were off-screen during season 5. During casting, fake names, occupations, and scenes were temporarily assigned to limit the leaking of spoilers. Corey Hawkins joins the cast as supply runner Heath, a prominent and long-running comic book character who is a loyal friend of Glenn Rhee.[8] During the casting call, Heath was referred to as "Delvin", a "cynic [who] is left so dumbfounded by displays of stupidity that it’s nearly impossible for him to admit that he thinks, down deep, people are – or at least can be – decent. Even if they’re idiots."[9] Ethan Embry also joins the cast as the original character, Carter, whose character during the casting call was called "Tucker", a "hard-working man" who "values fairness"[9] and is an "amalgamation" of several characters from the comic.[10] Kenric Green, whose wife Sonequa Martin-Green plays Sasha Williams on the show, also joins the series as the comic character Scott, Heath's supply run partner and friend.[11]

The episode received positive reviews. On Rotten Tomatoes, it holds a 95% with an average rating of 8.76 out of 10, based on 22 reviews. The critics' consensus reads: A knockout opener to The Walking Dead's sixth season, "First Time Again" has everything one would hope for - including intense plot development, entertaining character interplay, and more zombies than ever before.[12]

Variety's Brian Lowry assessed that "The Walking Dead looks very much at the top of its game, with strong character material mixed with a massive set piece in the extended premiere made possible, no doubt, by its enormous popularity. Blessed and cursed with a vagabond mentality, the first episode finds the gang still trying to fit into a gated community, where the promise of security is balanced against the cultural clash separating the battle-hardened travelers from those sheltered within. Add one familiar face to the mix, and it’s a pretty irresistible feast."[13] Brandon Davis of Comicbook.com praised the episode and felt that Andrew Lincoln gave his best performance to date, as well as its unique storytelling of shots in the past and present, while also singling out the character of Carol Peletier saying: "Though not given a hefty amount of screen time, McBride's Carol Peletier remains a strong foundation for the group with her sly performance as the undercover post-apocalyptic friendly neighbor." He concluded his review saying: "All in all, the premiere is going to satisfy die-hard Walking Dead fans and Walking Dead critics alike. Staunch performances from the well-known cast and tremendous execution of character relationships combine for a satisfying 90-minute premiere of The Walking Dead. Then, they're given the show's largest horde of walkers - ever - to cap things off and send the show back to its roots. Bring on season 6."[14] Writing for Hypable, Andrew Sims also praised the unique storytelling as "much needed" for a show that has five seasons under its belt and said: "[the] premiere offers fans one of the most exciting and original episodes in recent memory."[15]

Alex Zalben for MTV praised it as "...the most ambitious thing they’ve done in six seasons… And they nail it", while complimenting the character dynamics of the episode as well as its humour declaring it as possibly "the funniest episode of “The Walking Dead” ever. He singled out Danai Gurira as Michonne and Melissa McBride as Carol at the bulk of the humour. In particular, he praised Carol saying: "Carol, in particular, is a jaw-dropping, hilarious surprise in the hour. As much as she was reinvented into a deadly badass in season four and five, season six finds her taking a surprising turn that makes total sense for where she’s been, and where she’s going. Suffice to say, Carol — and McBride — continues to be the stealth weapon of the Grimes Gang." The addition of Lennie James was highlighted. In addition, Zalben noted the pacing remaining consistent, as he pointed out that fans "worried that the Group settling down in one location a la season two’s Hershel’s Farm meant we’re in for a slow year full of lots of talking and hand wringing… Don’t worry. Not only has Gimple led his company to showing instead of telling, and making the dialogue scenes actually count versus repeating the same themes over and over; but the action picks up from the very first scene, and doesn’t let up. And isn’t going to let up any time soon. The episode is an incredible, complete package, as big as you’d want a “Walking Dead” movie to be; but it also shows how things start off bad — and as usual, are only getting to get way, way worse.[16]

In its initial broadcast on AMC in the United States, on October 11, 2015, the episode received 14.63 million viewers. The viewership slightly declined from the previous season's record breaking premiere, "No Sanctuary", but was the most-watched television series of the night.[17] Cumulative viewership, comprising those who watched the episode live, when it first aired, plus those who watched the episode within three days after its original broadcast, was 19.5 million.[18]

In the United Kingdom, the episode broke records and became the most-watched of the series, garnering 800,000 viewers upon airing.[19]

Retrieved from "https://heykidscomics.fandom.com/wiki/First_Time_Again?oldid=1680200"
Community content is available under CC-BY-SA unless otherwise noted.