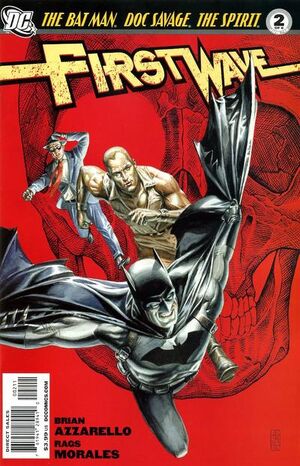 When I look at the world, I see nothing but murder. I see monsters, faces smeared in gore, dressed in skirts sewn from the skin of their parents. I see an unending sadness, born of violence, destined to rot from the same. I see blood... I see humans, aping humanity. I see through the disguise... I see myself.

The Golden Tree bears bitter fruit! The Blackhawks are after The Spirit. Doc Savage is after the Blackhawks. Anton Colossi is after William Littlejohn. And only Rima, the eyes of the jungle, knows what the heroes do not: something glorious and terrible has risen in the darkest corner of Hidalgo!

Retrieved from "https://heykidscomics.fandom.com/wiki/First_Wave_Vol_1_2?oldid=1427709"
Community content is available under CC-BY-SA unless otherwise noted.