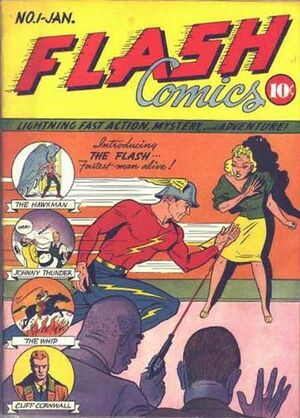 Appearing in "Origin of the Flash"Edit

Synopsis for "Origin of the Flash"Edit

Jay Garrick, a student at Midwestern University, is involved in a lab accident and accidentally inhales the fumes of hard water gas. The fumes cause Jay to develop tremendous speed, enabling him to move and think at super-human rates.

Jay graduates from college and moves to New York to become an assistant professor at Coleman University. There, he begins a career as the Flash, a super-hero who battles gangsters.

Jay’s college sweetheart, Joan Williams, visits Jay and enlists his help in locating her missing father, Major Williams. Joan’s father has been kidnapped by the Faultless Four, a group of scientists working for a foreign power. Jay rescues Williams from the villains who want the secret of the Atomic Bombarder. In the process, the Four are all killed, leaving Williams safe.

Long ago, Khufu and his love, Shiera, were both killed with the dagger by Khufu’s longtime enemy, Hath-Set. At the moment of his death, Khufu promised to be reincarnated, in order to avenge his own murder.

In modern New York City, Carter awakens from the experience, with knowledge of his previous unknown life. Soon after this he meets Shiera for the first time, as she's fleeing a deadly electrical "accident," in the NYC subway. Shiera has been plagued by dreams of her previous life as well.

Carter then fashions wings and a belt of ninth metal, an anti-gravity material with special properties. He also dons a hawk-shaped headpiece to appear as the Hawk-God Anubis, in which he dubs himself "Hawkman." He sets out to find the source of the subway disturbance.

Armed with a quarterstaff, Hawkman soon locates and invades the laboratory of Doctor Hastor, electrician extraordinary. Hall realizes that Hastor is the reincarnation of his ancient foe, Hath-Set, and smashes some of this equipment, while Hastor hastily escapes. Hawkman then flies back to Rimble Road and finds Shiera missing, re-arms himself with a crossbow and a Ninth Metal cloak, then flies back to Hastor's estate. Meanwhile, Hastor has used a "strange hypnosis" to telepathically summon Shiera, in order to use her against Hawkman. The winged hero returns to the villain's lair, finding Shiera already cued up on a sacrificial altar, and throws a protective sheet of ninth metal over Shiera to protect her, then shoots Hastor with a crossbow. Hastor's laboratory and estate are destroyed when he falls against his own dynamo, causing it to run wild, setting the stones of the place on fire. Hastor appears to die and the laboratory is destroyed. Finally, Hawkman returns Shiera to her home.

Synopsis for "The Kidnapping of Johnny Thunder"Edit

One year old Johnny Thunder, son of Simon B. Thunder, is kidnapped by agents of Badhnisia, working for the Priest of Aissor. Johnny was born at 7:00 AM on July 7, 1917 and according to Badhnisian legend, will inherit great powers on his seventh birthday. In an elaborate ceremony, in the Temple of the Seven Great Gates, Johnny is given a magical belt called the "Eternal Zone of the Zodiac," and a ceremony is performed with the mystical words Cei-U, which in English sound like "Say You."

When he is five, through an unlikely series of accidents, Johnny escapes from Badhnisia, and is returned home by an American freighter, then through another unlikely set of events, is reunited with his family. Starting on his seventh birthday, torrential rains last for seven days, all over the world, but the Thunder home is spared. The Badhnisian cultists search for Johnny, but they cannot locate him until he is twenty-three years old.

Johnny gains employment as a window washer and during an accident says the words "Say You." An invisible magic thunderbolt appears and answers Johnny’s wishes, although Johnny is unaware of its intervention. The Badhnisians attempt to kidnap Johnny again, but the Thunderbolt rescues him. Johnny however loses his job.

Synopsis for "Origin of the Whip"Edit

Bored and wealthy playboy Rod Gaynor decides to travel across America with his assistant Wing. His travels bring him to Seguro in the American Southwest, where he meets Marisa Dillon, the daughter of a newspaper publisher. Marisa is concerned for the poor laborers who are being mistreated by the law.

Intrigued by Marisa and wanting to help the poor, Gaynor is inspired by the legend of Don Fernando Suarez, a rich man who took the secret identity of El Castigo, the Whip, to fight against wealthy landowners in the 19th century. Gaynor puts the legend to work for him and becomes a new incarnation of the Whip. For his first act, he rescues Carlos, a wrongly imprisoned worker, and defeats the disreputable town sheriff.

Retrieved from "https://heykidscomics.fandom.com/wiki/Flash_Comics_Vol_1_1?oldid=1621645"
Community content is available under CC-BY-SA unless otherwise noted.