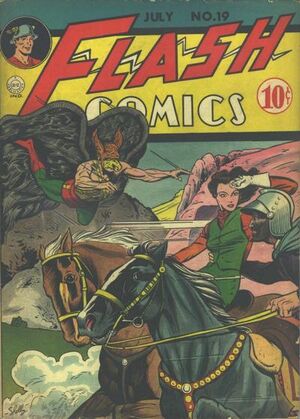 If this isn't a case for the Flash, I'm the original slowpoke!

Appearing in "The Fall Guy"Edit

Synopsis for "The Fall Guy"Edit

While driving through the city, Jay Garrick accidentally hits a man with his car. His insurance agent suggests that it could have been part of a racket. Sure enough, when the agent produces pictures of known criminals, Jay recognizes the man he hit. As the Flash, he goes to the hospital and grabs the man, taking him to the building of his lawyer, Gypper Zilich. Frightened, Zilich confesses to being part of many different fake accidents around the city. After learning of planned crimes, the Flash runs around stopping them and bringing all the culprits back to Zilich's office. When Bridges, the head of the accident racket, arrives on the scene, the Flash locks the entire gang in the office and swiftly brings the D.A. and police to arrest them.

Retrieved from "https://heykidscomics.fandom.com/wiki/Flash_Comics_Vol_1_19?oldid=1496699"
Community content is available under CC-BY-SA unless otherwise noted.