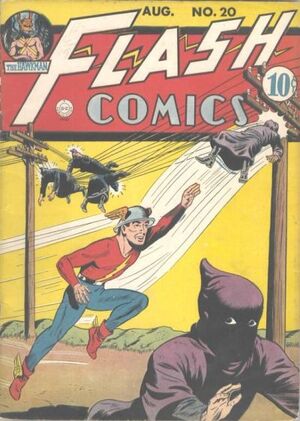 Don't you ever get tired of buying useless things?

Appearing in "The Adventure of the Auctioned Utility Company"Edit

Synopsis for "The Adventure of the Auctioned Utility Company"Edit

At an auction attended by Jay Garrick and Joan Williams, Joan accidentally purchases the deed to the Useless Utility Company for two dollars. She and Jay arrive at the company building, where they are greeted by Jim Coleman, the former owner, who hands over the keys. As Joan prepares to clean the building, Jay, as the Flash, cleans it before she can begin. He then follows Jim to his Uncle Thistlewit's mansion, where he learns that Thistlewit had stolen Jim's inheritance from his father and ran the utility company into the ground.

The Flash follows Jim to a bridge, where the man attempts to commit suicide. The speedster saves him, and together they decide to get back at his uncle. Jim returns to the company to help out Joan while the Flash roughs up several goons hired by Thistlewit to take down some power lines.

The Flash then, after frightening Thistlewit by dragging the old man through his swimming pool at superspeed and dismantling his car, convinces him to have a change of heart and invest in the company, which Joan returns to Jim.

A week later, Joan accidentally buys a stuffed whale at another auction.

Retrieved from "https://heykidscomics.fandom.com/wiki/Flash_Comics_Vol_1_20?oldid=1496696"
Community content is available under CC-BY-SA unless otherwise noted.