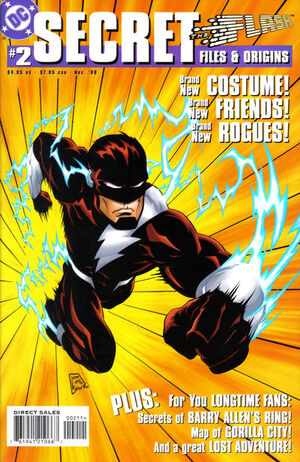 Captains Boomerang and Cold rob a jewelry store truck while Tony Gambi watches from a nearby building. The new Flash arrives and stops the criminals seemingly so brutally that Captain Cold gets a broken arm and Captain Boomerang is caught in an explosion getting serious burns all over his body. Tony gets into the game and manages to knock Flash unconscious long enough to get the villains to safety. They get Captain Boomerang some medical attention and summon several other rogues to discuss this new Flash. While they do, Tony recalls how he grew up surrounded by the Rogues who took care of him as well as provided some training. After some of the Rogues express their misgivings about fighting this new Flash, Boomerang suggest a new Flash needs a new Rogue and that they should make one. Enter T. O. Morrow who brings a "Humanifold" that will grant a person super-powers. Tony volunteers and after a few rogues admit doubts, Boomerang convinces the others that he's the right choice. T. O. Morrow activates the machine and each of the Rogue's weapons are disintegrated and molecularly fused with Tony as he is converted into...Replicant. Replicant goes to Governor Thornton's campaign party causing havoc until the new Flash arrives. After a brief battle Replicant leaves and returns to Boomerang's side leaving Flash to search in vain for him.

Paul Gambi creates a catalog of Flash Rogue-inspired outfits and accessories but, before he can mail the catalogs, he is confronted by the Rogue's Trademark Attorney who files a lawsuit.

Appearing in "Lost Pages: The Stunning Secret of the Scarlet Speedster's Super Slow-down"Edit

Synopsis for "Lost Pages: The Stunning Secret of the Scarlet Speedster's Super Slow-down"Edit

Flash has been hit by some type of ray gun which transfers his super-speed to the Turtle Man's henchmen who are looting the town. Flash strains as he runs in extreme slow motion until he theorizes that his motion is what's fueling the transfer. He uses his ability to control his body on a molecular level to come to a complete stop. Thus denied of energy, the henchmen lose their speed and the transfer ends. With his speed regained, Flash easily defeats the villians.

Synopsis for "Map of Gorilla City"Edit