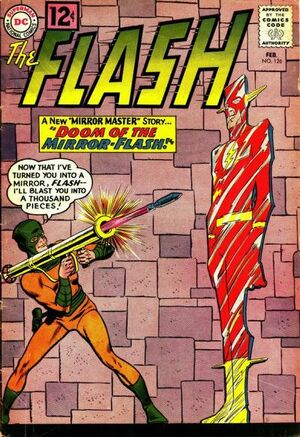 Ha ha . . . the Flash will never find me in this mirror world!

Appearing in "The Doom of the Mirror Flash!"Edit

Synopsis for "The Doom of the Mirror Flash!"Edit

Barry Allen talks with his girlfriend, Iris West, as she prepares to make a television appearance. However, he is distracted thinking about the Mirror Master, who has avoided capture after escaping from prison a week prior. All of a sudden, Barry glances the villain through a window. Changing into the Flash, he follows in pursuit, only to see Mirror Master disappear after running into a weighing scale with a reflective surface.

One week earlier, Sam Scudder received a haircut in prison. Before being incarcerated, his research had uncovered the existence of a Mirror World, reachable only by being reflected in several mirrors at a particular angle. Scudder had convinced the barber to maneuver his mirrors at these angles during the haircut, and when they are positioned correctly, he suddenly disappears.

In the Mirror World, Scudder encounters the Orinocas, a civilization of warrior-like women. Intent on killing him, they have a change of heart when seeing one of his mirrors. Fascinated by them, he becomes a local celebrity, crafting mirrors for them. Intent on returning to his criminal ways, Scudder requests a copy of his Mirror Master costume be made for him and begins plotting things to steal. However, the telepathic Orinocas bring him everything he wants before he can steal them. Frustrated at his inability to be a thief again, he decides to return to Earth. However, he is unable to use mirrors for this purpose. He decides instead to lure the Flash to the Mirror World so that the speedster can bring them both back. He begins projecting his image into Central City, hoping to get the Flash's attention.

Back in the present, the Flash vibrates through the weighing scale and is sent to the Mirror World. He tracks down Mirror Master and brings him back to Earth. They arrive in the Central City Army Arsenal, where Mirror Master uses one of his devices to turn the Flash into a mirror and then fires a bazooka at him. However, the Flash vibrates his molecules, melting his mirror body and regaining his true form. After dropping off Scudder at the police station, the Flash returns to the television station, where, as Barry, he congratulates Iris on her appearance.

Appearing in "Snare of the Headline Huntress!"Edit

Synopsis for "Snare of the Headline Huntress!"Edit

On a train to Fallville, Iowa, actress Daphne Dean's press agent, Mr. Fowler, explains his latest publicity stunt: by pretending to reignite her relationship with childhood sweetheart Barry Allen. He had planned the trip to Fallville, and Daphne's upcoming movie release, to coincide with Barry's trip home to visit his parents.

Barry, who was also on the train, is seen by Daphne, who offers him a seat at their table. After the train arrives, the two decide to spend the afternoon together catching up.

That night, Barry dreams that he, as a young boy dressed as the Flash, rescues a young Daphne from a charging bull. In the morning, he decides to tell Daphne about his relationship with Iris.

Fowler had organized a Civil War-themed ball that night to publicize Daphne's movie, and Barry is invited. Daphne, who is wearing extremely valuable jewelry, reenacts a scene from the movie in which she, a Confederate spy, is captured by Union soldiers. However, after the reenactment, the men who were originally cast to play the four soldiers appear, announcing that they had been jumped by a gang, which now had Daphne and the jewels. Barry quickly changes into the Flash and chases after them, easily apprehending them.

Several days later, Barry leaves Fallville, thanking Daphne for their time together, but explaining that his heart lies with Iris. Fowler is extremely excited - the jewel robbery created a great deal of press about Daphne and her movie. Daphne, however, realizes that, even though she had not wanted to, she had fallen back in love with Barry.

Retrieved from "https://heykidscomics.fandom.com/wiki/Flash_Vol_1_126?oldid=1425206"
Community content is available under CC-BY-SA unless otherwise noted.