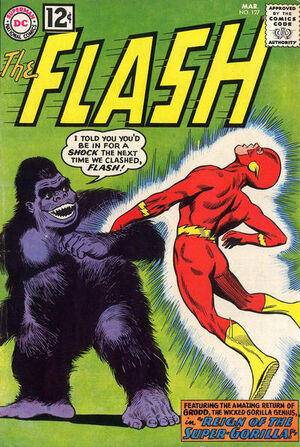 Running a gorilla for governor? How did we get hoodwinked into a thing like that, Denby?

Appearing in "The Reign of the Super-Gorilla!"Edit

Synopsis for "The Reign of the Super-Gorilla!"Edit

Gorilla Grodd, occupying the human body of William Dawson, is released from prison. He travels to Gorilla City, where his human body devolves into his old gorilla form. There, he falls in love with Boka, the bride-to-be of his rival Solovar.

Determined to win Boka's affection, he uses a machine in his laboratory, which had remained undisturbed during his imprisonment, to cause his body to emit neo-magnetic radiation, causing anyone who looks at him to instantly take a liking to him. It works as planned, and soon he is crowed king of Gorilla City, with Boka as his wife.

Not content with merely controlling Gorilla City, Grodd flies to Central City, where he quickly wins the admiration of its citizens. Barry Allen, alarmed at everyone's positive reaction to Grodd's return, changes into the Flash to investigate. However, he also feels a great admiration for the gorilla when arriving in his presence. Leaving town to ponder the dilemma, he discovers that Grodd's radiation only has a hundred-mile radius. However, no matter how fast he goes, he cannot get back into the city without being affected by the neo-magnetic radiation. Meanwhile, the Statewide Party decides that Grodd would make the perfect candidate for governor. Grodd is ecstatic, planning to move from there to the presidency.

After several days have passed, the Flash has still been unable to get into the city without being affected by the radiation. However, he noticed that on a particular day, when solar flare activity was particularly high, the strength of the radiation was not as intense as normal. He vibrated at the same frequency as the solar flares, and was able to easily enter the city and apprehend Grodd.

Appearing in "The Mystery of the Troubled Boy!"Edit

Synopsis for "The Mystery of the Troubled Boy!"Edit

Charles Elkin, the foster father of Wally West's good friend Tommy, asks for Wally's help in figuring out what had been troubling his son recently.

Wally follows Tommy into the woods and watches as he enters the building of the local Hillandale Hunting Club, dressed in the Cherokee garb of his ancestors. Wally, dressed as Kid Flash, follows him inside and confronts him. Tommy explains that he has suspected that it is inhabited by foreign spies. The spies discover them and, catching them by surprise, knock them out and take them prisoner. However, as soon as Kid Flash comes to, he and Tommy are easily able to apprehend them.

Retrieved from "https://heykidscomics.fandom.com/wiki/Flash_Vol_1_127?oldid=1425207"
Community content is available under CC-BY-SA unless otherwise noted.