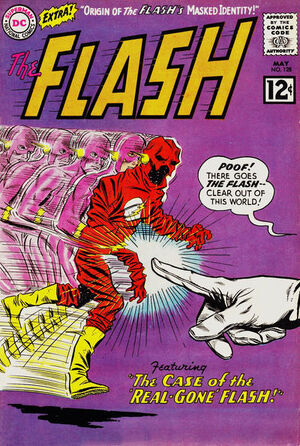 In 6363, magician Abra Kadabra sulks over the state of his profession. In his era, advanced technology has made magic tricks a thing of the past. When he hears that scientists have developed a time machine, he decides to steal it and go back to a time when stage magicians were treated like celebrities.

His plan is successful, and he arrives in Central City of the 20th Century. Using his futuristic technology to perform simple magic tricks, (and forcing his audiences to applaud), he is able to schedule several shows at a local hall. However, no one attends his magic acts because they are at a World Series game. After perusing the Picture News, Kadabra determines that the only way to gain attention in Central City, is by stealing something big. He decides to attend the dedication of a new statue in town, and make it disappear in front of everyone. After doing this, he uses his advanced technology to paralyze all the witnesses, including Barry Allen, who is therefore unable to pursue him as the Flash.

The next day, the Flash determines that Kadabra will likely strike next at the library, where the oldest book ever printed is being put on display. He is correct, but the magician foils him again. This time Kadabra forces the Flash to clap his hands and stamp his feet instead of chasing after him.

Later, Kadabra announces that he will put on the greatest magic show ever seen. A large crowd comes to see this performance. When the speedster arrives, he is sent flying off the planet by Kadabra, leaving his Flash costume behind.

Barry hurtles through space and eventually lands on an extremely small planetoid which has an atmosphere and gravity similar to Earth's. Using his super-speed, he is able to propel himself back home. He then tracks down Kadabra by vibrating at the same frequency as the radiation the magician used to send him into space, and thus follows the trail left behind from his costume. After arriving at Kadabra's base, the Flash easily defeats the magician by moving him into the path of his own paralyzing hypno-beam.

Appearing in "The Origin of Flash's Masked Identity!"Edit

Synopsis for "The Origin of Flash's Masked Identity!"Edit

Soon after receiving his amazing abilities, Barry Allen ponders whether or not he should wear a mask, since his predecessor, Jay Garrick, did not. He daydreams about addressing a conference of scientists, and telling them about his discovery of super-speed. In his daydream, his conference is interrupted by a massive tornado heading for Central City. With his super-speed, and not having a mask yet, he saves the city, and his face is all over the news.

As a result of all the media attention, a massive mob of people swarm around the police headquarters — all wanting to get a glimpse of the famous Barry Allen. When he hears of a burglary across town, he quickly changes into his "unmasked" costume, but is delayed by the mob outside when they recognize him. After struggling with the mass of people, he manages to catch the thieves, but realizes that if he had been kept another moment, the thieves would have gotten away.

As a result of this daydream, Barry decides to add a mask to his costume.

Retrieved from "https://heykidscomics.fandom.com/wiki/Flash_Vol_1_128?oldid=1425208"
Community content is available under CC-BY-SA unless otherwise noted.