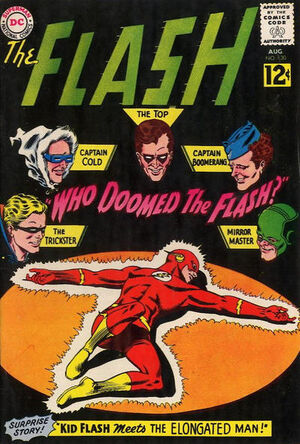 Appearing in "Who Doomed the Flash?"Edit

Synopsis for "Who Doomed the Flash?"Edit

Barry Allen goes to the dentist, who gives him a temporary filling and warns that it may come out. After hearing on the radio that Mirror Master was sighted, he changes into the Flash and dashes away. When he visits the jail, however, he is told that the Rogue was in fact still behind bars. Over the next week, the same thing happens with the Trickster, Captain Cold, the Top, and Captain Boomerang.

Looking for clues, the speedster visits the public defender who had worked with all five Rogues at their respective trials, Paul Barrett. Claiming he can't divulge any knowledge of the situation, Barrett begins to smoke a pipe, and the resulting fumes knock the Flash unconscious. Barrett goes to his closet, which is filled with Rogue uniforms, one for each villain that had made appearance over the last several days, as well as a Flash outfit, which he dons.

Barrett heads to the prison and, as the Flash, asks to speak with the Mirror Master. Scudder, who had used mirrors to control Barrett's mind during his last trial, commands his old lawyer to change clothes with him. The Rogue walks out of the prison dressed as the Flash, while Barrett stays behind in jail.

Scudder arrives at Barrett's office, where he changes into his Mirror Master costume and confronts the Scarlet Speedster, who is trapped in a device that will explode if he moves. After taunting his foe, the Rogue leaves to commit a crime. The Flash is able to free himself by spitting his loose filling at a nearby light bulb, breaking it and interrupting the current powering the device holding him.

The Flash heads again to Barrett's office, where he finds the lawyer no longer under the control of Mirror Master. Barrett tips the speedster on where Scudder was likely to strike next, the Dagon Payroll Company. The Flash finds him there and easily apprehends him. After dropping the Rogue off at prison, the speedster heads to another appointment to get a new filling. When the dentist apologizes for the first filling coming out, Barry thinks to himself how the fact that it did fall out saved his life.

Wally West, sitting in his bedroom in Blue Valley, gets a visit from his mentor, the Flash. The elder speedster says that he has received a letter from Elongated Man, asking for his help with a strange mystery. However, the Flash will be going on vacation, so he asks Wally, as Kid Flash, to take his place. An excited Wally agrees.

Later, Kid Flash travels to Goldville, Wyoming and meets Elongated Man, who explains the mystery. Even though it is spring throughout the country, Goldville and surrounding Oakley County are still experiencing severe winter.

Meanwhile, Weather Wizard observes his handiwork. He has built a weather control station, causing the extended winter, and threatened Goldville with more severe weather unless they pay him a total of $100,000 by that evening. His plan is to use the money to fund an even larger station.

After capturing one of the Rogue's henchmen robbing a bank, Elongated Man learns who is behind the weather. Meanwhile, Kid Flash happens upon the weather control station. He is met by Weather Wizard, who creates a thick cloud around the young speedster and knocks him out. Shortly, Elongated Man arrives, but he is stopped short by a bolt of lightning. Kid Flash wakes up and vibrates him free, and together, they are able to defeat Weather Wizard.

Retrieved from "https://heykidscomics.fandom.com/wiki/Flash_Vol_1_130?oldid=1425210"
Community content is available under CC-BY-SA unless otherwise noted.