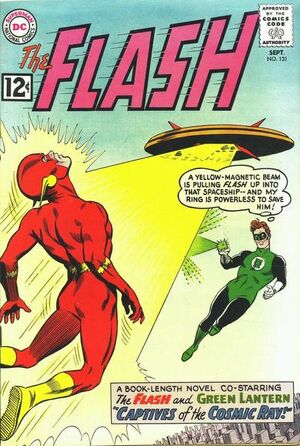 Appearing in "Captives of the Cosmic Ray!"Edit

Synopsis for "Captives of the Cosmic Ray!"Edit

Barry Allen and Hal Jordan purchase some arrows for an archery contest at a department store which features life-size statues of their alter egos, the Flash and Green Lantern. Afterwards, they return to Carol Ferris's home for their archery competition. However, it is interrupted by the arrival of a strange alien craft. Changing into their costumed identities, the pair chase after it, towards Coast City. However, the craft beams the Flash aboard and leaves Earth.

Green Lantern pursues the ship to a mysterious planet. It drops the Flash off on the surface, and Green Lantern discovers that it is unoccupied. The heroes are separated, however, by a sudden snowstorm. After a brief encounter with a giant creature, the storm ends and the Flash encounters the projection of an alien. Despite being turned upside-down with a strange ray, the speedster is able to avoid destruction and defeat the projection.

Meanwhile, Green Lantern is put into a predicament when gravity suddenly increases by a great magnitude, and, unable to move, he sees a giant wave of molten metal flowing toward him. However, with the aid of his ring, he survives. Afterwards, the gravity returns to normal and he is able to locate the Flash. Though briefly captured by giant hands that have grown out of a mountain, the pair of heroes is able to free themselves and head home to Earth.

However, they return to discover that the planet has been conquered by the alien Myrmitons. The heroes' experience on the other planet had been a diversion to get them off the planet while the aliens invaded. Threatened with the end of all life on Earth, the pair agrees to surrender. The aliens take Green Lantern's ring and use cosmic radiation to remove the Flash's speed.

However, the Flash soon explains to his friend what actually happened. In the split second before his speed was to be removed, he had dashed to the department store they had visited earlier and borrowed the life-size models of themselves. The ring Green Lantern had given up was in fact a replica, and the cosmic radiation had only hit the Flash dummy and not the real speedster.

Meanwhile, the Myrmitons, after failing to get the Green Lantern ring to work, suspect that they have been tricked. Their headquarters is surrounded by an energy barrier, which at first foils the Flash and Green Lantern's attempts to get inside. However, they soon figure out that the barrier does not penetrate underground, and they are able to get inside and defeat the aliens by burrowing in the ground beneath the base. They convince the aliens to leave Earth, holding a few of them hostage as incentive.

Afterwards, the two return to Carol's house in their civilian identities. They resume their archery contest, each deliberately missing the target so they can declare a tie.

Retrieved from "https://heykidscomics.fandom.com/wiki/Flash_Vol_1_131?oldid=1425211"
Community content is available under CC-BY-SA unless otherwise noted.