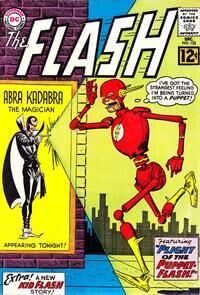 Appearing in "The Plight of the Puppet-Flash!"Edit

Synopsis for "The Plight of the Puppet-Flash!"Edit

Toiling away in a prison kitchen of the state penitentiary, Abra Kadabra aligns a series of pots and pans in a certain way to create a beam of light that hypnotizes the governor just moments before he is about to leave office and compels him to pardon Abra from prison. When the official document has been signed, it strikes midnight making the order legit and un-retractable as the governor no longer has any power in office due to his term ending.

When Barry Allen hears the news, he cancels a date with Iris to zip off at the Flash and learn the whole story behind Abra's pardon. The Flash meets with warden's office to learn that the pardon was official and there is nothing that can be done to reverse it as the governor has no power to do so, and the Flash suspects that Abra used his pseudo-magic to accomplish this feat. The Flash's deduction is right on the money as at that moment from a rented apartment, the newly freed Kadabra has returned to his costumed identity and plans once more to gain fame and fortune, first by appearing to have gone straight and then plotting new criminal endeavors.

Some days later, Abra Kadabra explodes on the theater scene with his new puppet show. When Iris and Barry attend the show, Barry is mortified to find that the show consists of two puppets, a "heroic" Captain Creampuff and another a villain modeled after the Flash. Barry realizes that Kadabra is deliberately trying to defame the Flash in the public eye with his ridiculous puppet act. Because Abra is not doing anything illegal, Barry realizes that there is nothing he can do except for ramp up his crime-fighting feats in order to counteract Kadabra's smear campaign. As the Flash goes out and increases his crackdown on crime, the people of Central City become more and more disinterested in Abra Kadabra's show and he sees flagging box office sales.

In order to get back at the Flash, he ramps up his advertising campaign for his show and sets a trap for the Flash. When the Flash happens by one of Kadabra's posters, it fires an energy beam that transmutes the Flash into a living puppet which Abra collects and decides to put into his show, as it would literally humiliate the Flash before a live audience. After some base humiliation at the hands of the Captain Creampuff puppet, the Flash manages to partially change himself back to normal and gain limited mobility by vibrating his body's molecules. He then trashes the Captain Creampuff puppet prompting Kadabra to come on stage to see what the commotion is about. The Flash then knocks out Kadabra with a knock out punch and retrieves the evil faux-magicians magic wand and uses it to restore himself back to normal. With Kadabra defeated, the Flash turns him over to the police.

Later, Iris confronts Barry with her suspicions that he is really the Flash, however when Barry openly admits it, Iris is convinced that Barry is not the famed super-hero because if he was, he'd probably be attempting to deny it.

Appearing in "Secret of the Handicapped Boys!"Edit

Synopsis for "Secret of the Handicapped Boys!"Edit

Up early on a day off from school, Wally West changes into Kid Flash and races off to the Sunfield Camp for Handicapped Children located on Blue Hill where he is scheduled to make an appearance for the disabled children that are attending the camp this year.

There Kid Flash puts on a display of a number of super feats, such as racing against marathon runners, grabbing flags and capturing a basket full of apples that is dumped out of a tree without letting any touch the ground. After the display, Kid Flash takes time to rest and remark over a number of the disabled children getting by even with their handicaps. While grabbing a hot meal, Kid Flash finds a message taped to the bottom of his plate asking him to go to a meeting at an old cabin up the trail.

Going to investigate he finds Freddy Garson (a mute), Dave Dent (who is deaf) and Harry Watkins (who is blind) all waiting for him. There the three children admit that they have accidentally deduced Kid Flash's secret identity. Harry recognizing that Kid Flash and Wally's voices are the same, Dave noticing the similarities by reading Kid Flash's lips, and Freddy recognizing the similar hand writing. The three boys are worried about what to do, and before Kid Flash can answer the rotted deck that Harry is standing on break and he is due for a serious and potentially fatal fall, but is saved by harm from Kid Flash.

Before leaving, Kid Flash -- without admitting or denying the boys discovery -- tells them that regardless of the truth the best thing that they can do is keep the secret of Kid Flash's identity and leaves. A few days later, Wally receives a package in the mail signed by his "three biggest fans", inside is a small statue of the wise monkeys (see no evil, hear no evil, say no evil) and realizes that the boys have decided to keep the secret of Kid Flash's identity a secret.

Retrieved from "https://heykidscomics.fandom.com/wiki/Flash_Vol_1_133?oldid=1425213"
Community content is available under CC-BY-SA unless otherwise noted.