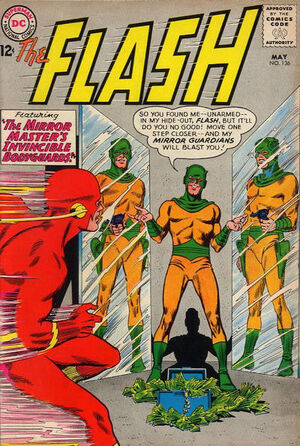 Barry Allen is in for a surprise when Iris invites him on a lunch date, and instead of getting lunch finds himself at the office of Professor Dobill who makes a living trying to analyze people and maximize their success. Iris tells Barry that she wants him to be more than the lazy and unmotivated person he appears to be, completely unaware that he is secretly the Flash. When left unattended in the waiting room, Barry overhears a radio news bulletin warning the public that the Mirror Master has broken out of jail. Deciding to come up with an excuse for his abrupt departure later, Barry changes into the Flash to search for his old foes.

Unable to find him, he goes to the jail where Mirror Master as being held and examines his room. Despite the fact that Mirror Master was not allowed to have a single mirror in his cell, the Flash finds a fire bucket and a loose wire that helped facilitate Mirror Master's escape. He explains that Mirror Master must have created a mirror by filling up the bucket with sand and using the wire to attract lightning that fused the glass into a reflective surface.

While at the hideout of Mirror Master, the crook reflects back at his motivation for breaking out of jail: The prison paper had listed him the third most successful Flash rogue, and had decided to break out to change that. He then begins his plot to destroy the Flash, by using a new device of his own invention he populates two mirrors with mirror duplicates that he will use to act as bodyguards for his current criminal plot, sure in the fact that they will aid him in stopping the Flash once and for all.

As the Flash uses his vibration powers to match the frequency of the radiation the Mirror Master used to create his duplicates, the Mirror Master checks the Prison Grapevine newspaper with his mirrors and learns that he has surpassed the Trickster for the number one slot in the most successful criminals pole. This victory is short lived when the Flash arrives, however the Mirror Master is ready for the Flash as he is standing between two mirrors casting reflections of his mirror doubles.

The Flash however is prepared for this gimmick, and using his vibration powers mimics Mirror Master's powers and splits into three distinct beings. Two tackle and easily destroy the mirror duplicates while the real Flash defeats the real Mirror Master, who is summarily put back into prison. To add insult to injury, when Mirror Master checks out the next issue of the Grapevine, he finds that he's been bumped down to the number six spot.

Barry Allen is also in some hot water, as during his next date with Iris West, he is told that Iris enrolled him in the professors classes no matter if he likes it or not.

Appearing in "Barry Allen--You're the Flash! --and I Can Prove It!"Edit

Synopsis for "Barry Allen--You're the Flash! --and I Can Prove It!"Edit

One day when Barry Allan is checking his daily schedule, he finds a strange note instructing him to go to the state prison and look for prisoner Rod Pagin and reveal to him his true identity. Convinced that this isn't some practical joke, nor a trick Barry decides to follow the instructions to find out what the mysterious note could possibly mean.

There at the prison, Barry arrives just as Rod is leaving the jail. When he confronts Rod and introduces himself, Rod then reveals that he's figured out that Barry is really the Flash. Pagin tells Barry that if he stays out of Central City from now on, he will not reveal his secret identity as the Flash. Unconvinced that Rod actually knows the truth or is calling Barry's bluff, Barry decides to keep a tab on him as the Flash. After busting a crime that is not being committed by Pagin, the Flash goes out every night to try and capture his foe. However, each time he arrives too late and finds nothing more than a condescending note from Pagin thanking the Flash for his lack of interference.

Back at his home, Barry begins deducing a way to capture Pagin and protect his secret identity when he remembers that he has to appear at the Central City Bazaar to put on a fake mentalist act for charity. Meeting with Iris he tries to wiggle his way out of performing, but nothing works and Iris instructs him that while he is blindfolded and guessing what objects she is collecting from the crowd. She tells him she will be giving him hints as to what she is holding up by the first word she uses in her question. As Barry is performing he comes up with the perfect solution to catch Pagin and preserve his identity. When people are looking away from the stage, Barry speeds away as the Flash and captures Pagin within the split second everyone's attention is divided.

Later, when Pagin is brought before the press to answer to his crimes, he reveals that he knows the secret identity of the Flash. He explains that prior to his previous conviction he had learned a form of subliminal ventriloquism and used it in the court room on the Flash so that when he got out of prison later the Flash would show up in his secret identity and reveal who he really is. The press and police then begin to laugh at Rod and tell him the Flash couldn't be Barry Allen because Barry was at the bazaar all night. Told this Rod, considers the possibility that perhaps Barry Allen was sitting behind the Flash in the court room and realizes that he's made a "mistake".

Later, Iris West pays a visit to Barry at his office and reveals to him that their charity event raised $10,000.

Retrieved from "https://heykidscomics.fandom.com/wiki/Flash_Vol_1_136?oldid=1425217"
Community content is available under CC-BY-SA unless otherwise noted.