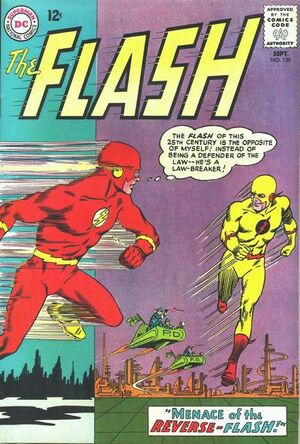 I always boasted I would be the greatest criminal in all Earth history. And there's no doubt that I shall attain my towering ambition. For who can stop me -- now that I possess the most precious gift a human being could ask for -- the power of super-swift motion!

Appearing in "Menace of the Reverse-Flash"Edit

Synopsis for "Menace of the Reverse-Flash"Edit

A time capsule, a space satellite with time travel capability that can assist in sending time capsules into the future instantly, has been sent to the 25th century. Among the items included the Flash has also given one of his costumes to send into the future. When the inventor uncharacteristically flees a televised interview, it piques Barry Allen's interest enough to investigate the situation as the Flash.

When Barry visits the inventor as the Flash, he learns that the scientist has discovered that the atomic clock they sent into the future would be altered by the journey and effectively become an atomic bomb. The Flash offers to travel into the future on his Cosmic Treadmill and go into the 25th century to prevent any cataclysm that might be caused by the time capsule.

Unknown to the Flash, a citizen of the year 2463 was on site when the time capsule re-entered the time stream and crashed in 25th century Central City. He removes the Flash's costume and has intentions to become the greatest criminal ever. He analyzes the costume and reproduces Flash's super speed abilities in the costume. He the makes the costume to be the opposite design of Flash's costume, this man begins calling himself Professor Zoom, and is dedicated to commit crimes as a Reverse Flash.

He then begins stealing valuable Cribi sculptures, that are worth a fortune due to the fact that the strange sculptures were found on a dead world. With his super speed, Professor Zoom manages to steal the statues and avoid capture from the high tech security systems that protect them. Around this time the Flash arrives in the future and begins looking for the atomic clock. Running to the location of the time capsule, the Flash goes over the checklist and finds that the atomic clock and his spare costume are not on site. He then begins sweeping around the future trying to find the atomic clock before it explodes. Along the way, Flash learns of the existence of the evil Reverse Flash in this time and also decides to try and capture the crook.

In his first encounter with Professor Zoom, the Flash attempts to capture him, however the Reverse Flash has the upper hand due to the fact that Professor Zoom has equipped himself with electro-rockets to escape. Realizing that Zoom emits the same vibrations as he does, the Flash manages to trace him back to his home. However, in the course of the fight the Flash finds that they are equally matched. However, deducing that Reverse Flash's powers do not protect him from the heat and friction of super-speed, Professor Zoom boasts that he's covered with a chemical coating that protects him from those side effects. The Flash then quickly grabs Zoom and races around until the coating is burned off and Professor Zoom surrenders.

Flash then devests Zoom of his costume and continues his search for the atomic clock. He finds it in the home of a woman who picked it up to admire it and races it away to someplace where it can detonate safely. Returning to the present, the Flash tells the professor that he succeeded in his mission and then destroys his spare costume so that nobody can use it for ill again.

Retrieved from "https://heykidscomics.fandom.com/wiki/Flash_Vol_1_139?oldid=1425220"
Community content is available under CC-BY-SA unless otherwise noted.