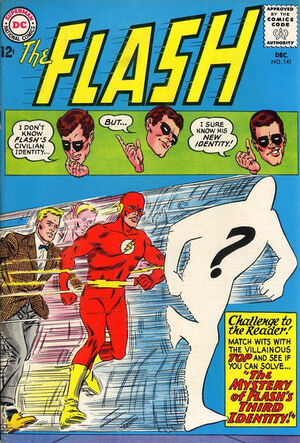 Appearing in "The Mystery of Flash's Third Identity!"Edit

Synopsis for "The Mystery of Flash's Third Identity!"Edit

The Flash, on the trail of the Top, comes across a tailor who makes costumes for super-heroes and is lured into a trap.

Appearing in "Slowdown in Time!"Edit

Synopsis for "Slowdown in Time!"Edit

Prof. Ira West suspects Barry Allen of being the Flash, and intends to use Barry’s wristwatch to prove it.

Retrieved from "https://heykidscomics.fandom.com/wiki/Flash_Vol_1_141?oldid=1425222"
Community content is available under CC-BY-SA unless otherwise noted.