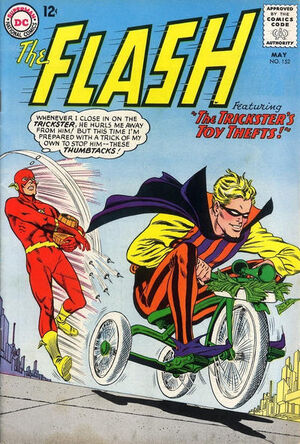 Appearing in "The Trickster's Toy Thefts!"Edit

Synopsis for "The Trickster's Toy Thefts!"Edit

The Trickster plans three toy-powered crimes, on land, sea, and air, and the Flash must attempt to stop him.

Appearing in "Case of the Explosive Vegetables"Edit

Synopsis for "Case of the Explosive Vegetables"Edit

The absent-minded Professor Ira West stumbles into a nest of spies, thinks that they are the group of scientists he is to address, and shows them his vegetable-growing ray that inadvertently turns veggies into explosives. The Flash has to sort things out.

Retrieved from "https://heykidscomics.fandom.com/wiki/Flash_Vol_1_152?oldid=1484518"
Community content is available under CC-BY-SA unless otherwise noted.