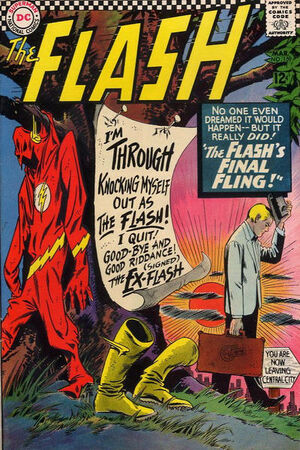 Appearing in "The Flash's Final Fling"Edit

Synopsis for "The Flash's Final Fling"Edit

When Barry Allen gives up his Flash identity in apparent disgust, Kid Flash vibrates them both into Earth-Two, where Dr. Charles McNider (aka Dr. Mid-Nite of the Justice Society) hypnotically reveals why Barry was manipulated into doing so.

In Rocket City, the Flash encounters a gang of thieves equipped with scientific gimmicks which the absent-minded Prof. Ira West has given them, thinking they are rocket scientists.

Retrieved from "https://heykidscomics.fandom.com/wiki/Flash_Vol_1_159?oldid=1484524"
Community content is available under CC-BY-SA unless otherwise noted.