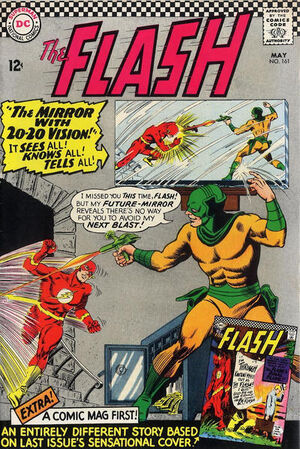 Appearing in "The Case Of The Curious Costume"Edit

Synopsis for "The Case Of The Curious Costume"Edit

This story offers an alternate story based on the scene depicted on the cover of Flash #159. When Flash makes a brief stop in another dimension populated by beings who move at incredible speed, he is late for his own wedding. Iris storms out, causing Barry to regret his dual identity. Barry gives up his costume and quits his role as the Flash. He then tries and fails to make up with Iris. When he sees his costume in the Flash Museum, he finds that he misses it. Barry puts on the costume as Iris looks on. He then defeats a gang of crooks. Iris thinks Barry was just trying to prove himself to her, little suspecting that she was learned his secret. Iris forgives Barry, who is happy to be back as the Flash.

Appearing in "Mirror with the 20-20 Vision"Edit

Synopsis for "Mirror with the 20-20 Vision"Edit

The Mirror Master invents a new mirror which can see 20 seconds into the future. The new ability gives the crook an advantage over his nemesis, the Flash. Flash then decides to travel three days into the future where he locates the Mirror Master's hide-out. Mirror Master's mirror predicts that Flash will be disintegrated by his weapon. When the scene plays out just as the mirror predicted, the Mirror Master believes he has killed the Flash. However, Flash merely stopped his internal vibrations and returned to the time three days earlier. Then he waits three days for the events to play out. Flash watches as Mirror Master gloats over his victory, then appears and captures his foe, destroying the special mirror in the process.

"The Case of the Curious Costume" & "The Mirror with 20-20 Vision" are reprinted in Showcase Presents: The Flash Vol. 3 TPB

Retrieved from "https://heykidscomics.fandom.com/wiki/Flash_Vol_1_161?oldid=1425242"
Community content is available under CC-BY-SA unless otherwise noted.