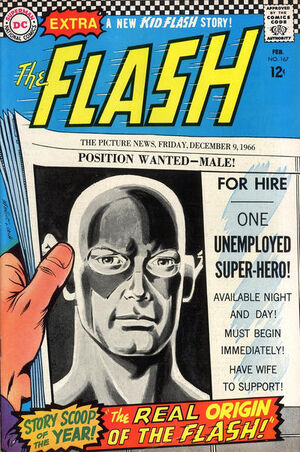 Appearing in "The Real Origin of The Flash"Edit

Synopsis for "The Real Origin of The Flash"Edit

Mopee, a helpmate with magical powers from who Flash calls an "alien", claims to be responsible for the Flash's origin. Mopee introduces himself as an "Initiate Tenth Class of the Heavenly Help-mates". He says he "deliberately brought down that bold of lightning after I checked you out to receive the gift of Super-speed". However, the fact that Barry Allen was drenched in chemicals he did not own is a technical foul. So, in order for the Flash to legally retain his powers, he must earn enough money to buy the chemicals, and do so as the Flash.

Appearing in "The Hypnotic Super-Speedster"Edit

Synopsis for "The Hypnotic Super-Speedster"Edit

During a hypnotist’s act in Blue Valley High School, Kid Flash helps a fat boy achieve his dream of moving at super-speed and also captures a gang of fur thieves.

Retrieved from "https://heykidscomics.fandom.com/wiki/Flash_Vol_1_167?oldid=1425248"
Community content is available under CC-BY-SA unless otherwise noted.