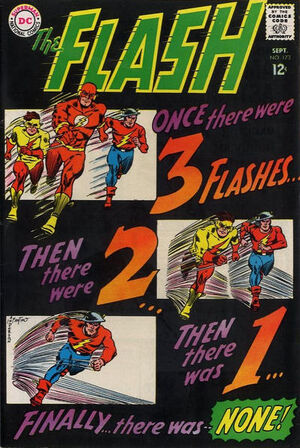 Jay and Joan Garrick arrive on Earth-One to visit Barry, but Iris informs them Barry and Wally went out to the movies. As they speak, Wally arrives, breathless, and Joan distracts Iris so Wally and Jay can talk. Wally and Barry had been headed to the movies, but were interrupted by a bank robbery. They sped to the rescue, but during the battle, Barry disappears in a flash of light, leaving Wally unconscious. Wally then finishes his story, and he and Jay go looking for Barry, but Wally then disappears too. He wakes up with Barry on another planet, where the Golden Man sends them off for a manhunt. However, this is revealed to be a ruse by the Golden Man to gather enough power to speed the evolution of his species. After Barry seemingly perishes in quicksand, the Golden man realizes that Wally won't be able to provide enough power on his own. The Golden Man kidnaps Jay then, who initially fights him but is defeated. He and Wally are then placed under a cold ray. Forced to vibrate to survive, they begin to falter. Barry Allen, revealed to have survived, runs in, and with the others help, defeats the Golden man. In a last ditch effort to stop them, the Golden man is devolved. The Flashes then return home, where they found up the Domino Gang and go there seperate ways.

Retrieved from "https://heykidscomics.fandom.com/wiki/Flash_Vol_1_173?oldid=1425254"
Community content is available under CC-BY-SA unless otherwise noted.