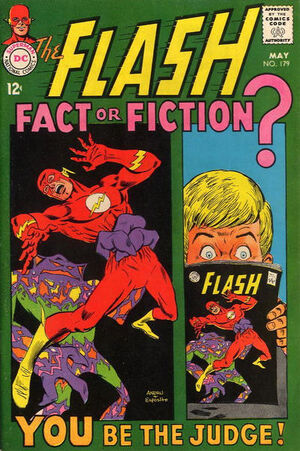 Appearing in "The Flash -- Fact or Fiction?"Edit

Synopsis for "The Flash -- Fact or Fiction?"Edit

Flash encounters a hurricane-like creature known as a Nok which feeds off Flash's aura. The Nok follows the Flash, who is unable to find a way to stop the creature. An alien hunter appears and tells Flash that he is responsible for bringing the Nok to Earth, but the Flash must recapture it before his ship leaves. While fighting the Nok, Flash is thrown into a parallel universe. He soon discovers that super-heroes only exist as comic book characters in this reality. He is unable to cross the dimensional barrier to return home, so he looks up the one person who will believe that he is a super-hero, DC Comics editor Julius Schwartz.

At the DC offices, Flash meets Julie and proves that he has super speed. Julie then gathers parts for the Flash to build a cosmic treadmill. The treadmill enables him to return to Earth-1. Once, he is back in his own universe, Flash is able to stop the Nok using a chemical that mimics his aura. The alien hunter then takes the Nok away from Earth.

Retrieved from "https://heykidscomics.fandom.com/wiki/Flash_Vol_1_179?oldid=1500644"
Community content is available under CC-BY-SA unless otherwise noted.