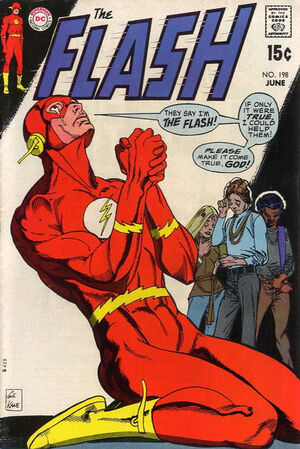 Appearing in "No Sad Songs for a Scarlet Speedster!"Edit

Synopsis for "No Sad Songs for a Scarlet Speedster!"Edit

The Flash’s head is grazed by a bullet while he is performing for three orphans, regressing him mentally to an eight-year-old.

Appearing in "Call It... Magic!"Edit

Synopsis for "Call It... Magic!"Edit

Zatanna is summoned by a magician to defeat a demon who has taken over his body. When she fails to safely exorcise the demon, she brings the Flash in to lend a hand.

Retrieved from "https://heykidscomics.fandom.com/wiki/Flash_Vol_1_198?oldid=1484546"
Community content is available under CC-BY-SA unless otherwise noted.