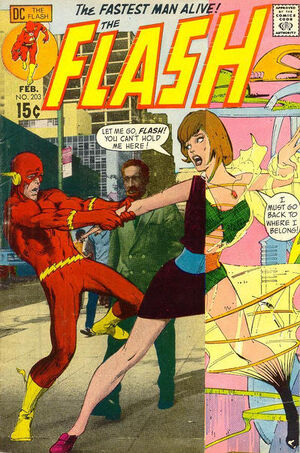 Appearing in "The Flash's Wife Is A Two-Timer!"Edit

Synopsis for "The Flash's Wife Is A Two-Timer!"Edit

The Flash finds out that Iris is really a native of the 30th Century, to which she has been drawn back by strange forces. Following her there, he discovers that her parents and all the people of that time are threatened by Sirik, an Asian invader.

Retrieved from "https://heykidscomics.fandom.com/wiki/Flash_Vol_1_203?oldid=1484549"
Community content is available under CC-BY-SA unless otherwise noted.