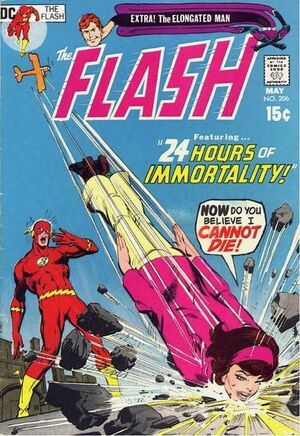 Appearing in "24 Hours of Immortality"Edit

Synopsis for "24 Hours of Immortality"Edit

Two aliens allow two accident victims to live, provided the mother of one and husband of another sacrifice their lives for them, which they will claim in 24 hours. The two accept the bargain, and are told that nothing may harm them until the aliens return to claim their lives. But the Flash takes a hand to keep them from having to fulfill the last part of the bargain.

Appearing in "Showdown in Elongated Town"Edit

Synopsis for "Showdown in Elongated Town"Edit

With no memory of how he got there, Elongated Man finds himself in a western town attacked by a typical western villain. The villain proves to be the Mirror Master, who is attempting to kill Ralph Dibny as a warm-up to his real target, the Flash.

Retrieved from "https://heykidscomics.fandom.com/wiki/Flash_Vol_1_206?oldid=1484550"
Community content is available under CC-BY-SA unless otherwise noted.