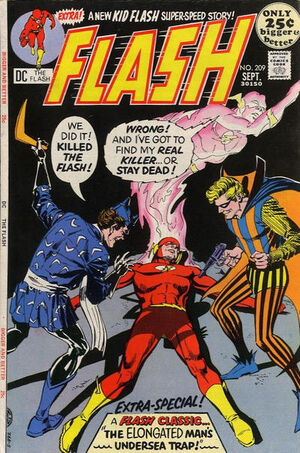 Appearing in "Beyond The Speed Of Life!"Edit

Synopsis for "Beyond The Speed Of Life!"Edit

The Trickster and Captain Boomerang think they have killed the Flash, but his spirit lives on and is busy trying to save the universe from the Devourer.

Appearing in "Coincidence Can Kill!"Edit

Synopsis for "Coincidence Can Kill!"Edit

Kid Flash has to save a classmate from a mob of crooks after the boy accidentally exchanges his gas-ring for Wally West’s costume-ring.

Retrieved from "https://heykidscomics.fandom.com/wiki/Flash_Vol_1_209?oldid=1484553"
Community content is available under CC-BY-SA unless otherwise noted.