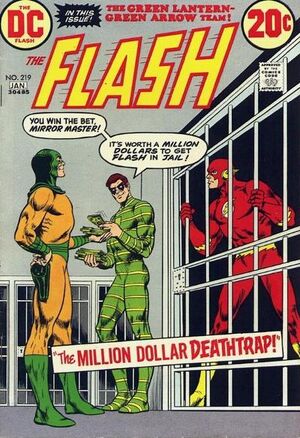 Appearing in "The Million Dollar Deathtrap!"Edit

Synopsis for "The Million Dollar Deathtrap!"Edit

The Top makes a million-dollar bet with Mirror Master that he cannot escape prison and destroy the Flash with top-weapons hidden in the outer world, and the Mirror Master takes him up on it.

Appearing in "The Fate of the Archer"Edit

Synopsis for "The Fate of the Archer"Edit

After Black Canary is injured by a pilled-out driver, Green Lantern goes in search of the only man with the correct type of blood to give her a life-saving transfusion...Oliver Queen.

Retrieved from "https://heykidscomics.fandom.com/wiki/Flash_Vol_1_219?oldid=1425299"
Community content is available under CC-BY-SA unless otherwise noted.