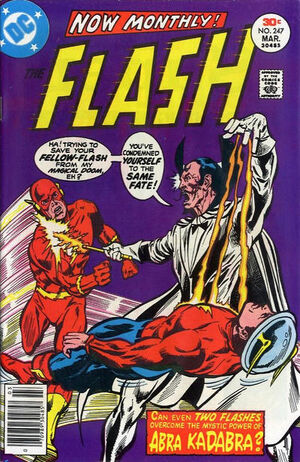 By the Great Houdini! The Flash disappeared!

Appearing in "The Mad, Mad Earth of Abra Kadabra!"Edit

Synopsis for "The Mad, Mad Earth of Abra Kadabra!"Edit

Flash is trapped in a specially designed prison cell in the 64th century. He is being held for the alleged murder of Abra Kadabra. In truth, Abra faked his own death in order to travel backwards in time to take over Earth of Flash’s era. However, he accidentally travels to Earth-Two and runs afoul of that world’s Flash – Jay Garrick. Abra captures Garrick, but mistakenly believes that he is Barry Allen in disguise.

The real Barry Allen meanwhile, finds an innovative way of escaping his cell and recreates the process that sent Abra Kadabra back in time to Earth-Two. He rescues Jay Garrick and together the two speedsters defeat the futuristic magician. They bring him back to the 64th century where he is incarcerated.

Retrieved from "https://heykidscomics.fandom.com/wiki/Flash_Vol_1_247?oldid=1496702"
Community content is available under CC-BY-SA unless otherwise noted.