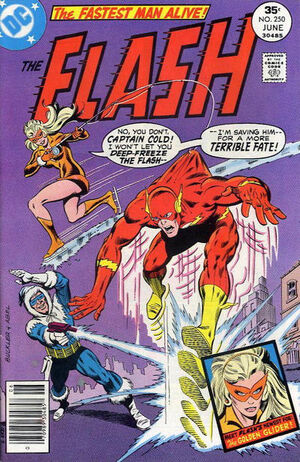 At least I don't have to pretend I miss Roscoe! What Lisa ever saw in that twirling turkey, I'll never know!

The Flash is endangered by Captain Cold, until a new foe, the Golden Glider, appears to save him--but only so she may destroy him herself, in vengeance for her dead lover, the Top.

Retrieved from "https://heykidscomics.fandom.com/wiki/Flash_Vol_1_250?oldid=1425330"
Community content is available under CC-BY-SA unless otherwise noted.