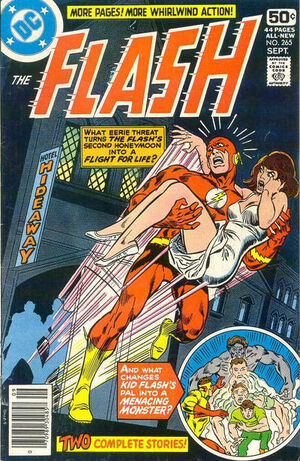 Appearing in "Shift the Earth Goodbye"Edit

Synopsis for "Shift the Earth Goodbye"Edit

On their second honeymoon, Barry and Iris happen onto a hotel full of alien infiltrators, and Barry becomes the Flash to combat them, not knowing they are actually benevolent.

Appearing in "Secret of the Shooting Star!"Edit

Synopsis for "Secret of the Shooting Star!"Edit

Kid Flash and some children Wally West is camp-counseling encounter an alien who turns some of the kids into giants.

Retrieved from "https://heykidscomics.fandom.com/wiki/Flash_Vol_1_265?oldid=1484591"
Community content is available under CC-BY-SA unless otherwise noted.