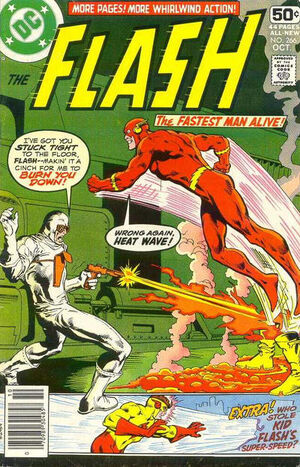 Ironic! I finally pull off the criminal coup of the decade -- the unmaskin' of The Flash -- and I still don't know who he is!

Heat Wave and his henchmen try to steal Egyptian relics from the King Ah-Mose treasure exhibit, however, they are caught in the action by The Flash. During the confrontation, Heat Wave is able to trap Flash for a moment, and fires his flamethrower gun at his foe, but Flash jumps out of the way and the heat beam destroys a huge air-conditioning unit behind him. With frost fragments exploding everywhere, the Flash is knocked out. Heat Wave notices the defenseless speedster, but fears the cold. Shivering, he walks away from the crime scene. He then turns to a criminal psychologist to get over his Cryophobia so he can face the Flash again. When Heat Wave does challenge the Flash a second time, he's able to outwit him, zap him with another heat beam and cause his foe to fall unconscious. Heat Wave then unmasks the hero, but is shocked when he doesn't know who he is. An hour later, Heat Wave places the unmasked Flash into a Cryogenic deep-freeze container -- leaving Flash trapped for centuries...

Appearing in "Case of the Missing Super-Speed"Edit

Synopsis for "Case of the Missing Super-Speed"Edit

A freak electrical accident transfers Kid Flash’s speed to another boy, and the young hero must find a way to reverse the process.

Retrieved from "https://heykidscomics.fandom.com/wiki/Flash_Vol_1_266?oldid=1425346"
Community content is available under CC-BY-SA unless otherwise noted.