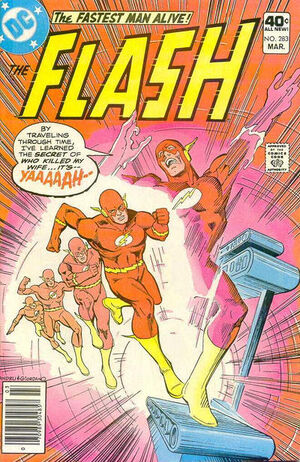 I ought to pound your face a few million more times... but right now I'll settle for putting you to sleep! We have a long trip ahead of us! And in case you've forgotten... the death-penalty is destined to be brought back in the 25th Century -- so once you're convicted you'll be given the execution you so richly deserve!

The Flash learns from a taped confession that Professor Zoom is the real murderer of Iris Allen. When the two men confront each other, they become trapped aboard Zoom's cosmic-powered time-sphere, which is going AWOL through time. Beating the murderous Professor Zoom nearly senseless, Flash then chooses to abandon the runaway machine and leave his foe to die as he zips ever faster into the past. The Flash finally leaps out of the machine into the time-steam, but to where?

Retrieved from "https://heykidscomics.fandom.com/wiki/Flash_Vol_1_283?oldid=1425363"
Community content is available under CC-BY-SA unless otherwise noted.